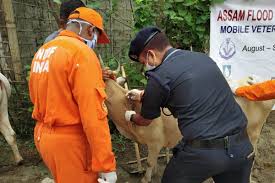 Till now the camps have been organized in five villages, covering 694 households and providing treatment to 3912 animals.

The animal health check-up and veterinary camp in flood-affected areas jointly organized by VERU, in collaboration with World Animal Protection, has been a great help to the villagers of Assam. Medical advice are also being provided to farmers for regular de-worming and vaccination against various diseases. The veterinary team is also giving guidance on the management of animals during flood season, care and management during pregnancies of animals & rearing of calf,” said Randhir Singh Gill, Commandant, 1st NDRF Battalion, Guwahati.

Heavy monsoon rains caused floods, landslides and destruction in Assam in July 2020. Two mighty rivers, Brahmaputra and Barak, and their tributaries have flooded almost all of the 33 districts in Assam.

Many rural economies and livelihoods have been destroyed. According to government reports, 2,543 villages in Assam are affected, 136 people lost their lives and approximately 50,000 people are residing in relief camps.

A total of 143 animals have died in the Kaziranga National Park and 165 have been rescued. More than 1.3 million livestock and 1 million poultry have been affected in Assam.

Many animals in flooded areas are stressed and stranded in contaminated floodwaters, at risk from parasites, infection, diseases and injuries.

World Animal Protection will continue to organize these veterinary treatment camps in 15 more villages that have been severely affected by the floods.

This response is also a reminder for the need of a state-level disaster management plan for animals in Assam.

“It is important that we don’t forget animals in times of natural calamities. We urge the Government of Assam, to formulate a state-level disaster management plan for animals to protect animals from future disasters. It is also essential that the welfare of animals is integrated in all disaster management and disaster risk reduction programs of the government. We also appeal to all veterinary officials and students to complete the PrepVet training module of World Animal Protection to enhance their skills of caring for animals during disasters,” said Gajender K Sharma, Country Director, World Animal Protection India.

While disaster response rightly prioritizes people’s immediate needs, the long-term recovery from disasters is inextricably linked with the well-being of their animals.

Communities and people affected by the floods in Assam heavily rely on animals and agriculture to make ends meet and in this critical stage, the recovery from the floods by saving animals will provide stability for their future.