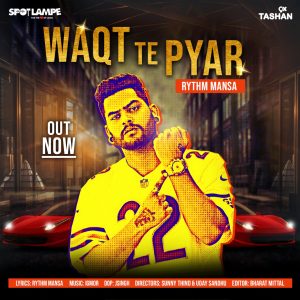 SpotlampE, the go to music platform for independent artists, by 9X Media, has launched a new Punjabi track titled ‘Waqt Te Pyar’ by Rythm Mansa. Filled with swag and sensational-tune, ‘Waqt Te Pyar’ is swaying the Indie Music Charts!!! Launched on 10th March ‘Waqt Te Pyar’ is available on SpotlampE and the song is also being aired on 9X Tashan.

‘Waqt Te Pyar’ is written & sung by Rythm Mansa and directed by Sunny Thind & Uday Sandhu. Rythm Mansa started as a rapper in 2010 and later ventured into music production and singing. Later on, he started writing and producing in all genres. Currently this multi-talented singer is producing, singing and writing his own songs. Rythm is all set to touch a chord in the hearts of the people with ‘Waqt Te Pyar’

Speaking about ‘Waqt Te Pyar’ singer Rythm Mansa said “This song is quite close to my heart as it expresses my struggles and hardships. In everyone’s life there comes a time when the person thinks that everything bad in the universe always happens with me. The phase when life starts showing its true and dark colours! That’s when I wrote this song expressing my everyday struggle and hardship of life. It is not just a song but an expression that I wish to share with my fans and music listeners. I hope ‘Waqt Te Pyar’ will receive loads of ‘Pyar’ from the listeners.”

Commenting on the launch of ‘Waqt Te Pyar’, Punit Pandey, Chief Business Officer, 9X Media said, “Punjab has become home to India’s non-film music industry. Some of the hit original songs come from Punjab and also make their way into Bollywood films. In the recent past, SpotlampE has released many Punjabi tracks which received a great response from the audience. We are delighted to partner with Rythm Mansa and present this rhythmic new song ‘Waqt Te Pyar’. The Song will definitely resonate with the music listeners.”

‘Waqt Te Pyar’ is being promoted across 9X Media Network and its social media handles. The track is also available across all Audio & Video streaming platforms & on YouTube.