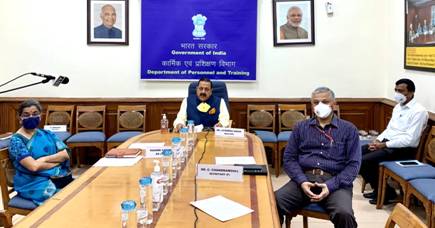 JAMMU June 8, 2020:Union Minister of State (Independent Charge) Development of North Eastern Region (DoNER), MoS PMO Dr. Jitendra Singh on Monday inaugurated the 18th Bench of Central Administrative Tribunal (CAT) for the Union Territories of Jammu and Kashmir and Ladakh through a Video Conference. Speaking after the inauguration Dr. Singh said that the setting up of CAT Bench of Jammu to deal exclusively with service matters of government employees would go a long way in not only reducing the burden of various Courts and thereby giving them more time to deal with other cases expeditiously but would also provide to the persons covered by the Administrative Tribunals speedy relief in respect of their grievances and service matters.
He said that Modi Government is committed to Transparency and “Justice for All” and the people friendly reforms taken in the last six years have benefited the entire country including people of Jammu and Kashmir and Ladakh. He said that more than 800 Central laws, which were not applicable to J&K have been made
applicable since the abolition of Article 370 and 35A on 5th August 2019 for the benefit of people of Jammu & Kashmir and Ladakh and now they enjoy same rights as people from the rest of India. Dr. Jitendra Singh expressed hope that pendency of about 30,000 cases would be resolved in a time-bound and judicious manner.
Dr Jitendra Singh said that all three important agencies of DoPT- CAT, CIC and CVC are now operational in UTs of J&k and Ladakh. Earlier, in a notification issued on 28.05.2020 in the exercise of the powers conferred by sub-section (7) of section 5 of the Administrative Tribunals Act, 1985 (13 of 1985), the Central
The government has specified Jammu and Srinagar as the places at which the benches of the Central Administrative Tribunal shall ordinarily sit for the Union Territory of Jammu and Kashmir and Union Territory of Ladakh.
Similarly, the Central Information Commission (CIC) has started hearing the Right to Information (RTI) Act applications of applicants from the UTs of J&K and Ladakh from 15.05.2020. Dr. Singh said that Sanjay Kothari, Central Vigilance Commissioner who called on him on 5th May 2020 informed the Minister that the
jurisdiction of the Central Vigilance Commission has been extended over the Union Territory of Jammu and Kashmir under the Prevention of Corruption Act.
Chairman, Central Administrative Tribunal Hon’ble Justice L.Narasimha Reddy gave the welcome address. The inaugural ceremony was also addressed by Chief Justice of the High Court of Jammu and Kashmir Hon’ble Gita Mittal and Lieutenant Governor of Union Territory of Jammu and Kashmir Girish Chandra Murmu. Member Judicial, Central Administrative Tribunal, Jammu  Rakesh Sagar Jain gave the vote of thanks on the occasion.
By YS.RANA:
yadavindras@gmail.com