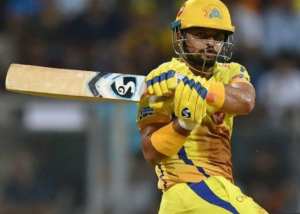 MUMBAI 30 August 2020 – Two players and 11 other people have tested positive for COVID-19 after arriving in the United Arab Emirates for the Indian Premier League (IPL), while all-rounder Suresh Raina has pulled out of the tournament for personal reasons.

This year’s IPL will be played in the UAE from Sept. 19 due to the situation of the pandemic in India where there have been a reported 3.46 million cases and 62,550 deaths due to the virus.

The Indian cricket board (BCCI) said 1,988 tests had been carried out between Aug. 20 and 28 across the teams and other officials in the UAE as part of its health protocols.

“Thirteen personnel have tested positive of which two are players,” the board said in a statement.

“All the affected person as well as their close contacts are asymptomatic and have been isolated from other team members. They are being monitored by the IPL Medical Team.

“As per the IPL 2020 health and safety protocols, testing on all participants will be conducted regularly throughout the IPL 2020 season.”

The board did not specify who the 13 personnel represented in the 13th edition of the tournament but local media in India said all of them were from the Chennai Super Kings (CSK) camp.

Three-time IPL champions CSK also lost Raina, who is second, after India captain Virat Kohli, in the all-time list of highest run-getters in the popular tournament.

“Suresh Raina has returned to India for personal reasons and will be unavailable for the remainder of the IPL season,” Chief Executive Kasi Viswanathan said on the team’s Twitter feed.

“Chennai Super Kings offers complete support to Suresh and his family during this time.”

A fluent left-handed batsman and handy off-spinner, Raina retired from international cricket this month, minutes after his CSK captain, Mahendra Singh Dhoni, announced he was quitting playing for India.