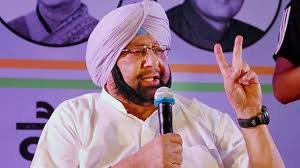 Chandiarh,December 7,2019: Taking suo motu cognizance of media reports alleging nexus of some politicians with gangsters in the state, Punjab Chief Minister Captain Amarinder Singh has ordered an inquiry into the matter, promising stern action against anyone found to be so involved while expressing full confidence in his colleagues.

The Chief Minister has directed DGP Dinkar Gupta to inquire into the “allegations as made out from the documents/photos” that have been submitted to him and which “prove to the contrary” of the allegations made by opposition parties, said Captain Amarinder in his orders, dated December 5, 2019.

The statement of Chief Minister is signal of trouble for Jail and Cooperation minister Sukhjinder Singh Randhawa against whome SAD president Sukhbir Singh Badal and former minister Bikram Singh Majithia have levelled serious allegatuions of shileding gangster Jagggu Bhagwanpuria who is operating extortion racket from inside the jail. It was expected because Randhawa had annoyed the CM on several issues. The CM action may be a step forward to corner Randhawa.

The photographs submitted to CM show a notorious criminal, who has many cases against him and has links with a known gangster, with top Akali leaders, including Sukhbir Badal, Bikram Majithia and Harsimrat Badal, said an official spokesperson.

Captain Amarinder made it clear that “no one encouraging unlawful activities in the State will be spared and stern action, whatever warranted as per law, shall be taken.”

“I have no doubt that none of my colleagues is involved in any such nefarious activities,” the Chief Minister further said, in response to the allegations levied by the Shiromani Akali Dal (SAD) and Bharatiya Janata Party (BJP), who have targeted Jails Minister Sukhjinder Singh Randhawa over the past few days, in the wake of the murder of former Akali Sarpanch Dalbir Dhilwan.

Rejecting the allegations as false and baseless, Randhawa himself has challenged the Akali leaders, saying that he was ready for probe by any independent agency or sitting judge. It was the Akalis whose patronage of gangsters and jail mismanagement had destroyed the system, Randhir said, demanding that Sukhbir Singh Badal must also get Bikram Singh Majithia’s complicity with drug smugglers and gangsters probed.

Both Sukhbir and Majithia should also agree to an investigation, Randhawa said, lashing out at Majithia as “the kingpin of gangsters and drug smugglers.”

Further, said Randhawa, the jailed gangster Jaggu Bhagwanpuria, with whom he (Jails Minister) was being accused of association, was active during the SAD-BJP rule, with as many as 29 of the 44 cases registered against him relating to Majithia’s constituency.