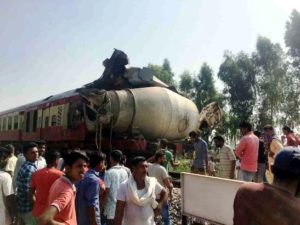 Ferozepur, October 8, 2017 : Today, there was a severe rail accident at the unmanned railway crossing, between train and truck on Ferozepur-Fazilka rail track near Bahmniwala Railway station near village Sidhu Wala.

The train was coming from Ludhiana rammed into a truck full of concrete mixture at the unmanned railway crossing today, killing the driver of the train on the spot, identified as Vikas K.P., 30 years old.  However, all the passengers of the train escaped unhurt.

The train No.74971 has a collision with the truck near Bahminwala village, 25 KMs from Fazilka on Ferozepur-Fazilka rail track.

The force of the collision was so strong that the truck stuck into the front portion of the engine of the train.

The truck driver fled away from the scene after the accident. Immediately on getting the information,DRM along with senior officers reached at the spot of the incident. According to the Gate Friend Gurdev Singh, the unmanned crossing was blocked with a rope and the driver the truck signaled to stop but he ignored and collided with the train.

A local NGO, M.L.Gandhi pointed out that despite pointing out to connect the railway unmanned crossing with red light from the nearest station, the railway has failed to take any action.

A Fazilka-bound train coming from Ludhiana rammed into a truck loaded with concrete mixture at an unmanned railway crossing on Sunday morning, killing the driver of the train on the spot.