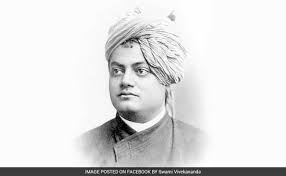 Addressing this campaign Anurag Thakur, the Union Minister of State for Finance said that, “Narendranath Dutt, known as Swami Vivekananda had said that India will become the Vishwa Guru in the 21st century and today’s Narendra (Modi) is progressive to make India the Vishwa Guru.

“At a very young age Swami Vivekananda’s achievements at the global stage put India’s name on the map and his precious thoughts give us new purpose to live life and inspire us from generation to generation,” he said.

India’s most beloved intellectual and spiritual Guru Swami Vivekananda was born on 12 January 1863 in Calcutta now Kolkata and his childhood name was Narendranath Dutt.

Thakur said that Swami Vivekananda taught us that nothing happens if we run away from the situation, we should go ahead and face the situation.”

He further said that India is the country with the largest youth population in the world, which is determining the present and future. At the time of the global pandemic Corona under the leadership of Prime Minister Narendra Modi, the youth made people aware, distributed masks which resulted in India being one of the countries with the lowest mortality rate from the CORONA.

Accusing Delhi’s AAP government Thakur said that, the Delhi government did nothing during the Corona epidemic but BJP karyakartas did the work of providing food-ration and all possible help to the migrant workers and the needy. We have to make every section of Delhi aware of the public welfare policies of the Modi government and its benefits as well as connect them with those policies.

MP Gautam Gambhir said that Swami Vivekananda was such a great man, a man like him is born once in centuries and we are proud that he was an Indian.

Swami Vivekananda had said that if we have to face disappointment in life, then to consider ourselves weak is the biggest sin, we should implement his thoughts in our life and never give up.

State YuvaMorcha President Vasu Rukhar said that Swami Vivekananda taught us to arise, awake, and stop not till the goal is reached. We have pledged to make the youth, up to the Mandal level, self-reliant through the “ChaloBanayenAtamnirbharYuva” campaign.

Arvind Kejriwal congratulates fellows on the concluding sessionof CMUL fellowship
Breaking: Kisan Morcha stands for the repeal of Farm Laws, not to participate in the committee proposed by SC
Comment