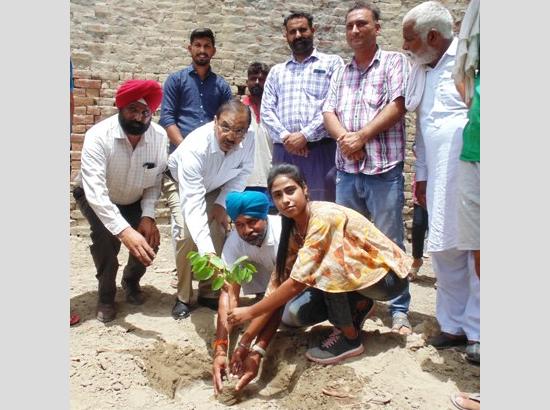 Ferozepur, July 1, 2019: To commemorate the 550th birth anniversary of Shri Guru Nanak Dev Ji, a total of 550 saplings will be planted in every village of the district, as a part of which a mega-plantation drive was launched by the deputy commissioner Ferozepur Mr. Chander Gaind in the village Bajidpur on Monday.

The deputy commissioner launched this drive through primary school students of village Bajidpur by making them plant samplings in the school campus. Mr. Gaind exhorted the students to ensure the maintenance and growth of the saplings planted by them by regularly giving them water and protecting them from animals. He then asked school management committee, NGOs involved in this drive to ensure the maximum growth and safety of the plants.

Divulging the details, the deputy commissioner said that there are 838 Panchayats in the Ferozepur district, where more than 4.60 Lakhs plants will be planted during the next two months i.e. July to September. Under the drive, each village to have 550 saplings and our target is to complete the whole drive during monsoon.

Mr. Tarsem Singh, Assistant Range Officer of Forest department said that the department is all set to plant more the 4.60 Lakh saplings in the district and most of the plantation will be done during rains. We are generally planting shadow trees, fruit and flower plants besides medicinal plants at some selective locations, mostly in the schools, added Mr. Tarsem Singh.