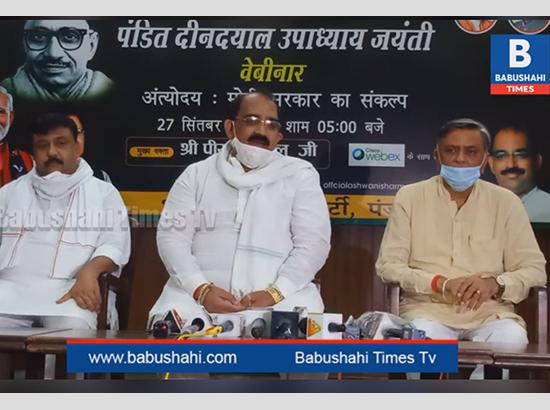 Chandigarh: 27 Septembern27,2020:  Dubbing the termination of an alliance between BJP and SAD as a “ last resort move “ due to political compulsion Ashwani Sharma said while addressing a core committee meeting here today that BJP stood with the economic interests of the farmers.

It is unfortunate that SAD today is accusing the BJP for not keeping the alliance on board with the agriculture ordinance recently passed in the Parliament. “ for the last three months not ones did the SAD come forward against the bills, however it defended the bills and said on record that the visionary bills will uplift the economic interests of the farmers “ said Sharma. However it made a u- turn and snapped the ties with the BJP a party which through thick and thin has stood with SAD . Rued the state BJP supremo. The BJP had always worked for peace and harmony during the dark times faced by the state and will continue to spear lead its secular flag in the state. Sharma also went on record that in the last six years of the party’s reign in the centre it has revolutionised the farming sector by providing 11 crore farmers 6000 rupees direct transfer to farmer accounts. Farmer credit cards, prompt supply of Urea and other Fertilisers. The record procurement of crops and the increase in MSP are all pivotal indicators that the Modi government has delivered a roadmap for turning the non remunerative profession in the country.

The BJP has said that MSP will stay and the political parties like Congress, APP and now sadly SAD are spreading misinformation to the farming community and the false propaganda that MSP will be withdrawn will soon be over as the BJP will never abandon the farmer . It respects the agrarian sector and will always strive to bring a “ better economic future” to the farmers.