Home » TATA SONS, GODREJ READY TO EXPLORE MORE VENTURES IN PUNJAB AS CM WOOS INDUSTRY IN MUMBAI ICICI BANK AGREES TO CONSIDER CAPT AMARINDER’S REQUEST TO SHIFT BACKEND OPERATIONS TO MOHALI
By S.K.Vyas
Mumbai, April 10 : Punjab Chief Minister Captain Amarinder Singh on Monday got an assurance from Tata Sons chairman Natarajan Chandrasekaran to visit the state soon to explore the possibility of setting up a major venture, even as ICICI Bank Ltd. CEO & MD Ms. Chanda Kochhar agreed to consider the possibility of shifting the bank’s backend operations to Mohali in the next stage of their expansion.
On the first day of his 3-day Mumbai trip to woo investors, as part of the state government’s `Invest Punjab’ initiative, the Chief Minister, who is leading a high-profile delegation, promised to streamline the systems and processes to make the state more investor and industry friendly, while reiterating his commitment to provide power to the industry at Rs. 5 per unit.
Besides one-to-one meetings with Chandrasekaran and Kochchar, the Chief Minister also held separate meetings with Goldman Sachs Chairman Mr. Sonjoy Chatterjee and Godrej Group Chairman Adi Godrej.
During his meeting with Chandrasekaran, the Chief Minister pointed out that Punjab was the only power surplus in the country with abundance of cheap power for industrial units coupled with hard working and dedicated human resource in terms of young and talented youth. With power at Rs.5 a unit, Punjab would be the second state after Himachal Pradesh to offer power to the industry at such low tariff, he added.
During detailed talks with Kochchar, Captain Amarinder suggested that ICICI bank move its backend operations to Mohali, as HDFC Bank and Infosys were already doing. The ICICI Bank chief said they would consider this as and when they decide to expand.
Development of the Chief Minister’s ancestral village, Mehraj, as a model digital village, support to small dairy farmers, besides training & skill development of farmers and unemployed youth were other issues on which the two sides agreed to work closely, according to Raveen Thukral, Media Advisor to the CM and a member of the delegation accompanying Captain Amarinder.
On the issue of farmers’ training, the Chief Minister stressed the importance of reducing reliance on paddy and wheat by shifting to other products, such as dairy, fruits and vegetables, for which the farmers needed to be trained. He also suggested opening of youth skill development centres, on the lines of the one being run in Mohali by ICICI Bank, in all districts of the state
Kochchar promised to consider reskilling and financing to partner the state government in the establishment of such centres for youth and farmers, with experts called in from various fields to take the process forward.
Finance Minister Manpreet Singh Badal, who is part of the Chief Minister’s delegation, urged ICICI Bank to consider developing 200 model dairy farms in the state exclusively for breeding purposes.
The Chief Minister agreed to let the bank develop Mehraj as a digital village as part of the `ICICI Digital Villages’ initiative, through which the bank plans to transform 100 villages across the country into digital villages in 100 days. The Chief Minister further spoke about his government’s proposed Guardians of Governance scheme to ensure that the funds meant for welfare reached the people at the grassroots.
Kochchar said the bank would soon make a presentation to the Chief Minister in Chandigarh on the National Agriculture Market (NAM) online trading portal for farm produce launched last year by Prime Minister Narendra Modi. The bank is seeking to extend the e-initiative to Punjab.
Adi Godrej, during his discussion with the Chief Minister, spoke about the various ongoing Godrej projects in Punjab, including the Godrej Tyson Foods Limited project for which an MoU was signed with the Government of Punjab in 2015 and all clearances have since been issued. The project involves setting up a Ready to Eat Food Processing Facility with freezing capability and cold storage in Ludhiana.Godrej said his company was constantly looking at expanding further in Punjab with more ventures in the future.
Godrej, who is also chairman of the Indian School of Business, expressed concern about imposition GST on private educational institutions and urged the Chief Minister to pursue with the central government for exemption to such institutions
At his meeting with Goldman Sachs Chairman Sonjoy Chatterjee, Captain Amarinder discussed investment options for the state, which the former agreed to explore.
The evening concluded with a dinner meeting with KPMG India Chairman & CEO Arun K Kumar, during which Captain Amarinder urged KPMG to come up with out-of-the-box ideas for generation of revenue in the state.
Besides the Finance Minister and the Media Advisor, the delegation members include Irrigation & Power Minister Rana Gurjeet Singh, Senior Advisor to CM Lt Gen (Retd) Tejinder Singh Shergill, and Chief Principal Secretary to CM Suresh Kumar. Others accompanying the Chief Minister include Secretary (Political III) Mr. Karanpal Singh Sekhon, PSIC & IP Anirudh Tewari, PBIP CEO D.K. Tiwari and PBIP ACEO Shruti Singh. 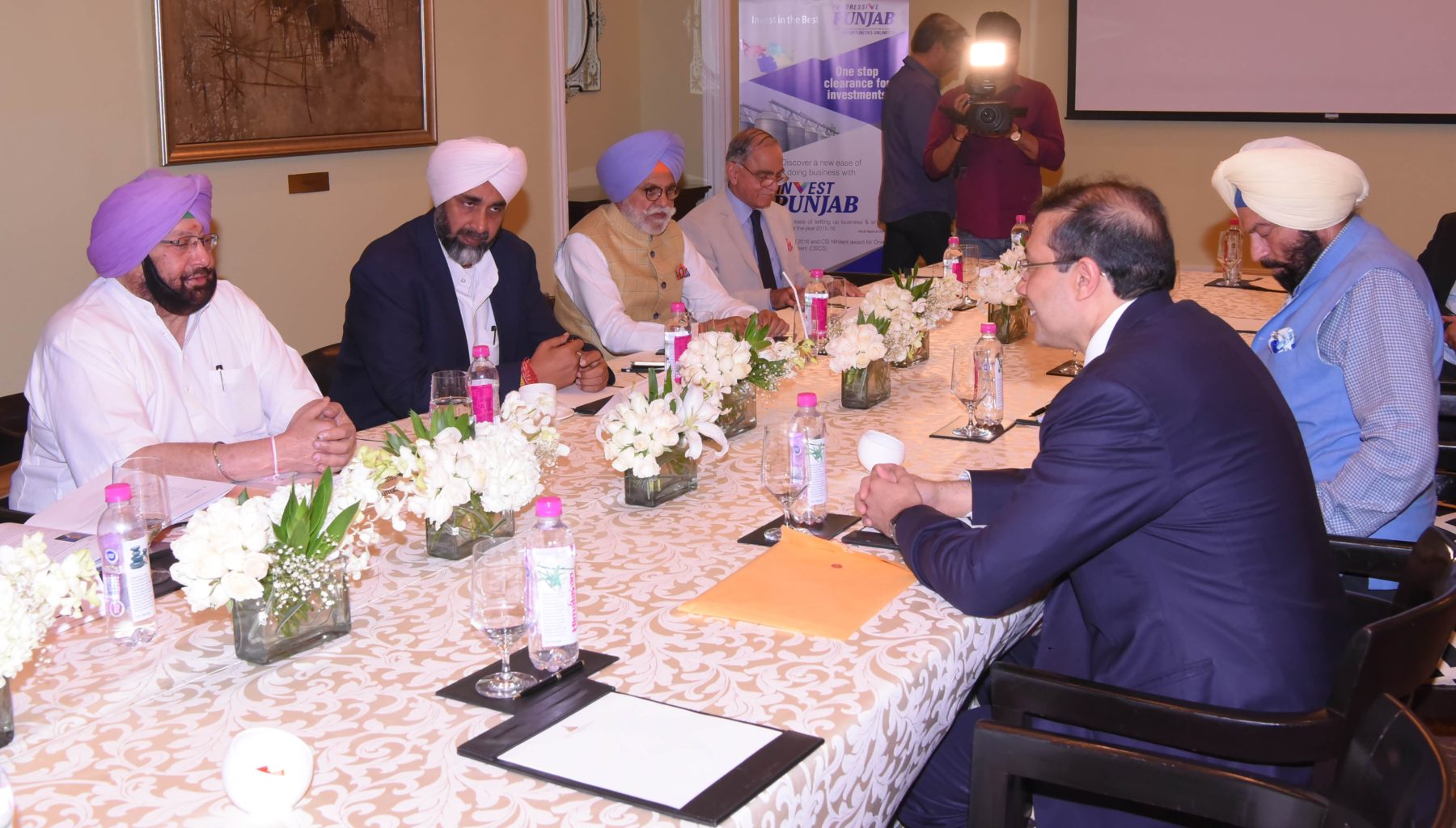