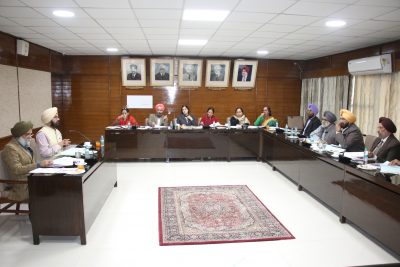 Amritsar​: The Syndicate meeting of the Guru Nanak Dev University was held here today in the Syndicate Room of the University.  Prof. Jaspal Singh Sandhu, Vice-Chancellor presided over the meeting while Prof. K.S Kahlon, Registrar presented the agenda. Prof. S.S. Behl, Dean Academic Affairs and a large number of members of Syndicate were present to discuss various issues.  Approval to new appointments, re-appointments, study leave, new courses etc. was the main agenda in the meeting.  As many as 20 PhD degrees were also approved in this meeting. S. Sukhjinder Singh Randhawa, Cabinet Minister and member of Syndicate was also present and discussed various issues and gave suggestions relating to new courses.

Vice-Chancellor Prof. Sandhu informed the members about the development of the University. He said that recently University has received the award as second Cleanest Higher Educational Institution in the country.  He said that since his joining as Vice-Chancellor, the H- index has been raised from 64 to 102.  He said that last year few International students were admitted in various courses and this year many International students are expected to seek admission in various courses. So keeping in view their convenience, the university will construct a state of art new International Hostel as per international standards. For their facility and language problem, few senior students will be trained as their mentors to learn university culture and adequate arrangements will be made for their food also. 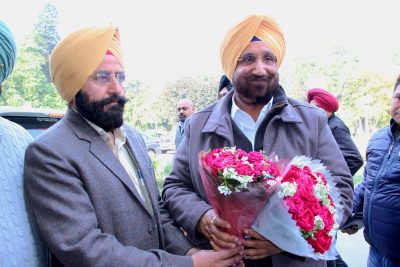 He said that to encourage reading habits among all, Bhai Gurdas Library will be equipped with more facilities and maximum soft copies of books will be made available along with online subscriptions of books and e-journals. This facility will be available online to the students within Campus and they can also download to get prints.  In reply to S. Sukhjinder Singh Randhawa, he said that more vocational dual degree programs with foreign universities will be introduced to control the migration of youth to other countries. Dr Ved Parkash expressed his concern over the lack of interest of boys towards higher education as in most of the courses girls are dominating in seeking admission in various courses.

He further said that during 46th Annual Convocation of the university which is scheduled to be held on March 5, 2020, the Honoris Causa Doctorate Degrees will be awarded to Dr. Naresh Trehan (Surgeon), Chairman & Managing Director, Medanta Heart Institute in the Faculty of Medical Sciences and  Sh. Pankaj Kapur, Eminent actor, story writer, screenwriter and director of Indian Theatre in the Faculty of Visual Arts & Performing Arts.

In another decision, University will issue identity cards to its Alumni after receiving a time Life Membership fee. This will also enable them to avail of facilities like stay, swimming pool, Gym etc.  located at the university campus. Similarly, the decision to reserve sponsored seats for postgraduate courses from Indian Army officers on Study leave from this academic session has also been approved by Syndicate. The syndicate also accorded its approval to the appointment of Col. Amarbir Singh as new Security Officer of the university.

Prof. Sandhu thanked the syndics and exhorted all to play a pro-active role in the further progress of the University. The members of the Syndicate congratulated the Vice-Chancellor and others for the overall development of the University.

Virtual Induction Program by Department of Tourism and Hospitality