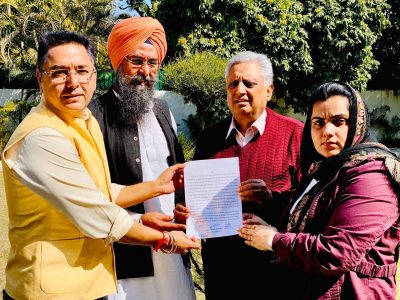 … AAP MLAs submitted a memorandum to the speaker

Chandigarh: Keeping in view of the growing menace of stray cattle in the state, the Aam Aadmi Party (AAP) will move a motion in the ensuing Budget Session of Punjab Vidhan Sabha to effectively deal with the malaise.

Addressing media persons after submitting the memorandum, Aman Arora, Kultar Singh Sandhwan and Prof Baljinder Kaur, said the menace of stray cattle had assumed alarming proportions, holding the successive  Congress and SAD-BJP government for the sorry state of affairs due to their turning a blind eye to the rising menace.

Expressing their grave concern over the menace, the AAP leaders said that umpteen innocent lives had been lost due to the menace of stray cattle, besides causing damage to the standing crops in the state.

Aman Arora said that if the government failed to act fast on checking the menace, the population of stray cattle would grow across the country, including Punjab, to some 28 crores which would require a minimum of Rs 5.40 thousand crores to maintain them.

Arora further said that through the resolution, the AAP had demanded that the government should ensure that the indigenous cows and bulls were kept in ‘gaushalas’ while American/ FS breed stray cattle be sent to slaughterhouses so as to make sure that there was no loss of life and crops.

Kultar Sandhwan and Prof Baljinder Kaur made a fervent appeal to the people of Punjab to press their respective legislators to support the resolution, rising above the party lines so that there was no loss of life and property due to the menace of stray cattle.