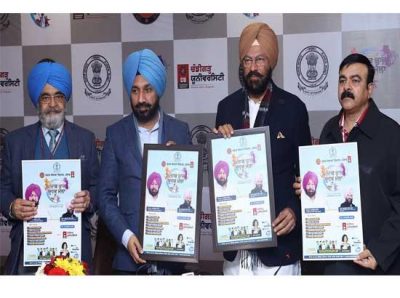 Chandigarh, January 23, 2020: “Youth has major role to play in the development of society, state and nation at large and with this mission, the Government of Punjab is organizing a first of its kind Punjab State Youth Festival-2020 at the campus of Chandigarh University, Gharuan on 30th- 31st January 2020” announced Minister of Sports, Youth Affairs and NRI Affairs, Rana Gurmit Singh Sodhi.

He was speaking during a media interaction at the university campus. Rana Gurmit Singh was on a visit to Chandigarh University to meet the officials and look into the arrangements of the Punjab State Youth Festival.

While giving details about the State Youth Festival, minister said, “The State Level Youth Festival in which more than 15,000 youth from different parts of the state would be taking part would be inaugurated by Chief Minister, Capt Amarinder Singh on 30th January, while the valedictory ceremony would be held on 31st January”.

Special Secretary & Director, Sports & Youth Services, Sanjay Popali (IAS) Chancellor, Chandigarh University, Satnam Singh Sandhu and Vice-Chancellor, Dr. R. S. Bawa were also present on the occasion.
Sports and Youth Affairs Minister, Rana Gurmit Singh Sodhi announced that, “In the new sports policy of the Punjab Government 3% of the jobs would be reserved for the sports-persons and medal winners with mission to encourage their achievements”.

Further Rana Gurmit Sodhi announced that the government will now give 1 crore award money to gold medal winner in Asian or Commonwealth games while the silver medal & bronze medal winners will get 75 lakhs and 50 lakhs respectively. The overall budget for the sports has been hiked by 35% and would now be about Rs 150 crores said Rana Gurmit Singh Sodhi.

By hosting the Youth Festival, the State Government wants to convey the message to the youth of Punjab that your participation is crucial for the development of state and the dream which Capt. Amarinder Singh has envisioned about Punjab can only be cherished if the energy of Youth can be channelized towards the prosperity of the state, said Rana Sodhi. Rana Sodhi added that, “Youth of Punjab would be apprised about the innovative advancements in the field of Science & Technology, opportunities in the field of entrepreneurship, careers in emerging areas of Industry, international career & study options and careers in Indian Armed Forces”.

On the occasion, the minister launched the official website www.cuchd.in/pyf where youth of the state can register themselves for the participation in the Punjab State Youth Festival.

While interacting with the media-persons, Rana Gurmit said, “Youth from different parts of Punjab would also be taking part in the State Talent Hunt in which they would be participating in the 16 categories of art & craft, cultural, literary and designing competitions which is an attempt by the government to provide a platform to the budding talent of the state”.

Government of Punjab would be honoring the youth achievers with “Punjab Youth Icon Awards & Punjab Youth Achievers Award 2020” who have excelled in the field of Sports, Science & Technology, Civil & Administrative Services, Defense Services, Entrepreneurship, Cinema & Music, Culture & Literature and brought laurels for the Punjabi community and who have become role model for the next generation.

“A career summit will be organized as a part of Punjab State Youth Festival in which the youth would be apprised about the career opportunities in the emerging fields and plenary sessions would be organized by the experts from Industry, Civil Services, Defense Services, Representatives of Foreign Embassies and delegates from International Universities who will guide them with the career path to be successful in the respective domains” added Special Secretary & Director, Sports & Youth Services, Sanjay Popali.

In addition, there would be a Punjab Innovation Expo-2020 in which students from different universities and colleges of Punjab would be displaying their innovative products, patented products, start-up business models by the young entrepreneurs from different parts of Punjab in the Start-up and Innovation Exhibition during the State Youth Festival.

“An exhibition VIRSA showcasing the rich & vibrant Punjabi Culture & Values would be organized by the students of Chandigarh University which is an attempt by the government to establish connection of today’s modern youth with their heritage so that the legacy of our traditions and rituals can be transferred safely into the hands of next generation” said Sanjay Popali. Live-concerts by Bollywood  singer Niti Mohan and Punjabi Singers Jigar, Singa, Ninja, Bani Sandhu and others would be performing live along with actors from Punjabi Film Industry during the Punjab State Youth Festival, Special Secretary & Director, Sports & Youth Services added.

While interacting with the media, Chancellor, Chandigarh University, Satnam Singh Sandhu said, “The Department of Sports & Youth Affairs has developed a website to provide detailed information and schedule about the various activities planned under the Punjab State Youth Festival 2020”. For the Punjab Youth Achievers Award 2020, an online self-nomination process has been developed by the department where the youth from Punjab can apply to nominate themselves for the 13 categories of the awards that would be given by the Punjab Government during the state level youth festival.

“Chandigarh University has made elaborate arrangements for the stay and transport of the youth travelling from different parts of Punjab to participate in the State level Youth Festival being organized by the Government” said, Chancellor, Chandigarh University.

A state-of-the-art pavilion with ultra modern stage facilities is being erected to felicitate the youth to participate in all the events and activities so that they can gain confidence and become strong to face challenges of life, Sandhu added.