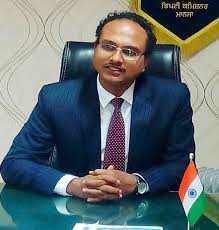 DC EXHORTS INDUSTRIALISTS TO APPLY ONLINE FOR THE AWARD ON http://investpunjab.gov.in/static/msmeawards
By SK.Vyas:
Jalandhar, October 19,2019 : In a move aimed at giving further impetus to the industrial growth in the state, the Punjab government has decided to confer Punjab Micro, Small and Medium Scale Enterprises (MSME) awards to the best performing industries in the state.
Divulging the details, the Deputy Commissioner Jalandhar Varinder Kumar Sharma said that Punjab has a natural pool of Micro, Small & Medium Enterprises (MSMEs) with a strong presence in the Light Engineering, Knitwear and Clothing, Sports Goods and other sectors. He said that MSME sector was the backbone of the Punjab industry and accounts for nearly 60% of the total output and around 80% of the total employment in industry in the State. Mr. Sharma said that over the years, Industrial employment has been growing in Punjab along with industrial output because of the expansion of labor-intensive MSMEs in Punjab.
The Deputy Commissioner said that in order to further encourage the MSME sector to perform their best the Punjab Government has decided to confer best performing MSME awards to the units. He said that for it the state government has invited applications from MSMEs for awards in nine categories viz. Afro and Food Processing, Automobiles and Auto parts, Textiles, Engineering, Pharmaceuticals, IT and Electronics, Sports, Hand Tools and Leather Industry. Mr. Sharma said that it was totally an online process adding that the interested industrial units could apply at http://investpunjab.gov.in/static/msmeawards.
The Deputy Commissioner said that evaluation for the award was largely system based. He said that winning MSMEs would receive a cash award worth Rs. One lakh each and the last date of filing the application was October 31, 2019. Sharma said that the winners of the award would be felicitated during the Progressive Punjab Investors Summit scheduled to take place on December 5 at ISB Mohali Campus in Sahibzada Ajit Singh Nagar, Mohali.
The Deputy Commissioner exhorted more and more MSME units to apply for the awards and participate in this mega event. He said that besides helping the industrial units to assess their abilities it would also help them further to compete with their peers both within the country and across the globe