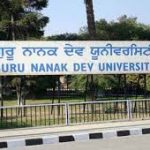 A Burden on the University – Registrar

Amritsar April 17, 2018 ( By Madhur ) – On Public demand, Guru Nanak Dev University vide its Syndicate Item Para-46 dated 15.9.2017 has given a Special Chance to those candidates whose degrees have been struck due to re-appears.

Prof. K.S. Kahlon, Registrar of Guru Nanak Dev University said that the Syndicate has resolved that this decision will be implemented to all those students, who had appeared in the examinations from the year 2011 onwards with a special fee of Rs.25000/- for each paper. This special chance examination has been granted to the candidates whose degrees have been deemed to be cancelled because they have not completed their degree within stipulated period mentioned in the ordinances. It is not a normal compartmental examination. Since this is a special chance exam, in this case special arrangements are to be made for paper setting, evaluation of answer books, setting of examination centres and appointment of supvisory staff. In addition, printing of Detail Marks Card and Degrees have to be done which are not to normal degrees. All these activities causes huge burden on the exchequer of the University, but due to public demand this special chance was given, which was earlier given in the year 2011 for which the fee charged was Rs.20,000/-, since then no special chance has been given.

There is an acrimonious situation prevailing in the Department of Music due to some unpleasant events which have taken place during the last few weeks and hence there is an unrest and uncertainty among the students and as a result the environment of the department is not conducive. Taking this into consideration, Controller of Examinations office will be recommending to the higher authorities the paper setting, conduct and evaluation of all the examinations of the Department from some other institution/Music department outside the jurisdiction of the University. This is required to maintain the proprietary, honesty and integrity of the examinations.