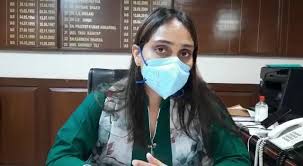 Ropar, July 9, 2020:  Deputy Commissioner Sonali Giri today self quarantined at home after local SDM G.S.Johal tested positive for Covid-19. He had mild symptoms. Johal had attended a meeting of PCS officers association on Friday last and he district authorities have advised all officers present in the meeting to be cautious.

Capt Amarinder set to kickstart covid vaccination of 1.74 lakh HCWS at 59 sites over 5 days in Punjab