At the edge of space, the ever-growing fleet of satellites in low-Earth orbit are locked in a constant, precarious battle with friction.

These satellites orbit in a normally quiet region hundreds of miles above the surface, at the edge of Earth’s atmosphere. Usually, the satellites only feel a gentle push due to the headwinds of the rarified air there, but extreme storms from the Sun can change Earth’s atmosphere enough to pull a satellite farther off orbit in one day than they’d normally experience in a year.

These orbital deviations don’t cause satellites to fall out of the sky, but they can disrupt their communication with Earth, shorten their lifespans, and can even increase the chances of a terminal collision in space.

While researchers and engineers have long been aware of this effect, known as orbital drag, a new collection of research led by NASA scientists is finding that less intense, but longer-lasting storms surprisingly have bigger effects on satellites’ orbits than the shorter, more severe events.

“Orbital drag is very important,” said scientist Jim Spann, a space weather lead at NASA Headquarters in Washington, DC. “This new result highlights the fact that even during less extreme space weather events, orbital drag of satellites is of greater impact than we anticipated. And it is becoming more and more of an issue, simply because we’ve got more and more and more spacecraft up there.”

NASA’s Solar Dynamics Observatory caught a glimpse of a huge coronal mass ejection, or CME, leaving the Sun on July 23, 2012. If such a CME had hit Earth, it could have caused trillions of dollars in damage to telecommunications and infrastructure. 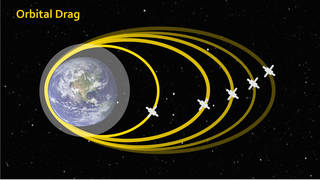 The swelling of Earth’s upper atmosphere during geomagnetic storms can alter the orbits of satellites, bringing them lower and lower. Orbits are not shown scale.

Our closest star, the Sun, provides the light to nurture life on Earth. But it also spews dangerous particles and radiation that can affect astronauts and technology in space. Scientists study the many affects from these outpourings, including what happens when such eruptions are extreme. When it comes to the thousands of active satellites in space, however, one of the key concerns is indirect effects from particles and radiation, even from lesser storms.

High-energy particles and radiation from the Sun can heat Earth’s atmosphere as they collide with common molecules, like nitrogen and oxygen. The heated air rises and causes the atmosphere to expand like a balloon. If a storm is strong enough, it will cause the atmosphere to expand so much that it engulfs the orbits of low-Earth orbit satellites that would otherwise fly through areas with little to no atmosphere.

Increased atmosphere is like running in a headwind – it slows you down. For a satellite, this resistance causes it to slow and drop down in altitude. During an extreme magnetic storm event, a satellite could drop nearly a third of a mile in elevation in one day, according to a new paper, recently published in the November issue of Space Weather.

“That’s a lot. In fact, it’s as much as a satellite would typically lose in a year,” said paper author Denny Oliveira. Oliveira is a scientist at NASA’s Goddard Space Flight Center in Greenbelt, Maryland, who has been studying how the Sun’s activity causes satellite orbital drag for the past few years.

But in their latest research, the scientists are finding that the effects of weaker, but longer-lasting storms might be just as impactful – if not more – than extreme storm events.

Oliveira and his colleagues studied extreme storms in the last century in order to understand how similar events would affect our modern-day satellites. Such superstorms from the Sun are rare – only one has occurred since the dawn of the space age, and it was only half as powerful as the 1921 event. However, in the same period there have been dozens of lesser magnetic storms from the Sun, not all of which have reached Earth.

The researchers used data on how satellites have responded to relatively small storms with records of magnetic activity on Earth during past superstorms. This helped them quantify, for the first time, how a satellite would weather a superstorm.

They found that the strongest storms don’t necessarily produce the most drag. The effects of a longer, less intense storm can build up over time, ultimately causing more orbital drag than a short, powerful storm. This finding surprised the scientists, who didn’t expect the duration of the storm to be such an important factor.

Solar storms disproportionately affect low-Earth orbit satellites, which live within the first 375 miles of space above Earth’s surface, which can be enveloped by a swelling atmosphere. The vast majority of new satellites call this region home, including the quickly growing constellations of communications satellites launched by private industries. 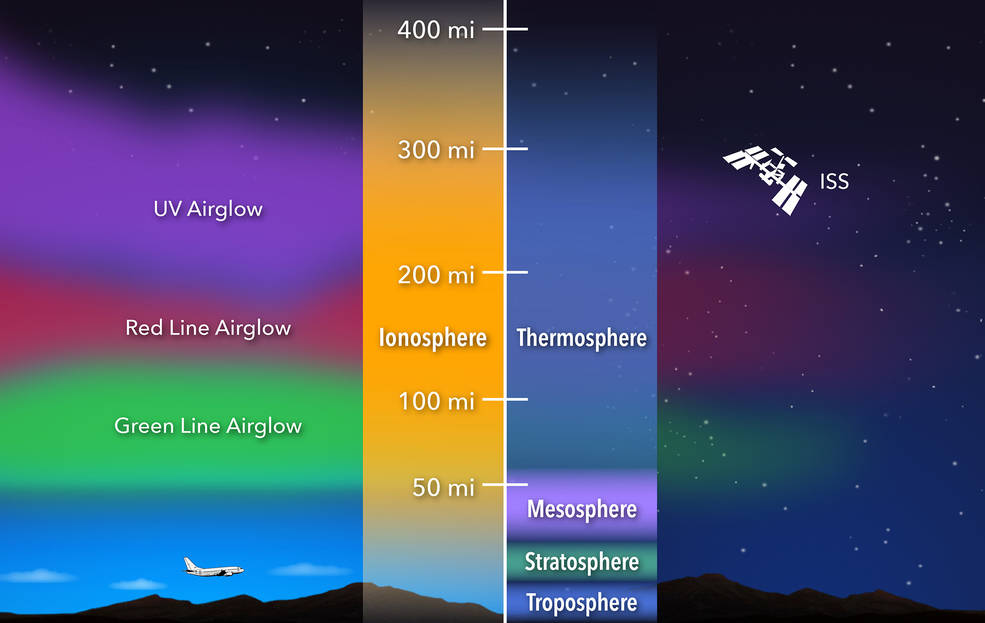 As solar activity heats the thermosphere, this atmospheric layer balloons and can engulf satellites that normally orbit in the nearly particle-free atmospheric region above it.

Orbital drag also affects the International Space Station, which travels in a low-Earth orbit some 250 miles above the surface. To avoid losing altitude during a solar storm, a team carefully monitors solar activity. The space station’s altitude can be adjusted upwards to compensate for natural orbital drag that affects all orbiting spacecraft, including during stronger drag events caused by space weather. Altitude adjustments are also used to maintain the correct positioning for the arrival of visiting spacecraft and occasionally to avoid orbital debris.

“During this most recent solar cycle minimum, sometimes it could be two or three months between maneuvers to maintain the station’s operational altitude,” said Charlie Gray, who works at the International Space Station program office at NASA’s Johnson Space Center in Houston, Texas.

Currently, the Sun is pumping up activity as it heads for the next solar maximum – the period during its 11-year cycle when it’s most likely to spawn huge flares and CMEs. While resupply spacecraft regularly visit the space station and can deliver more propellant, smaller satellites and CubeSats only have a limited supply, if any at all.

“This solar maximum is not predicted to be as significant as it was 20 years ago, but storm events are going to be more significant than they are right now,” said Jim Spann, space weather lead at NASA Headquarters in Washington, DC. “They will impact the orbital drag of small satellites, most of which do not have any propulsion of their own to correct the loss of altitude.”

Once a satellite is knocked out of orbit, the effects only worsen, since at lower altitudes there is more atmosphere and thus more drag, even in calm conditions. The lower a satellite is dragged, the amount of drag it experiences only increases.

Orbital drag is bad for a satellite that wants to stay at a working altitude, but it’s also bad for nearby satellites that might collide with a satellite that’s been dragged off-course. Furthermore, even tiny pieces of space debris pose a huge risk for satellites, so minimizing collisions is key to keeping the near-Earth environment a functional space for satellites.

“The idea is, if we know how intense the storm is, and how long this storm will last, we can more precisely track the satellite position,” Oliveira said. “This will help reduce the chances of collision.”

The new results are just one aspect of space weather and the field of heliophysics, in which scientists try to understand how activity on the Sun ripples across the solar system and affects Earth.

“Space weather is all about prediction – we need to predict it, we need to be safe,” Oliveira said. “It’s the same idea if you want to go to the beach – you want to know if it’s going to be rainy or sunny or if the waves will be too dangerous to swim. That’s more or less what we want to do with space weather.”

Scientists at NASA have been monitoring the space weather and effects of drag on satellites for decades, particularly since the 1970s when solar activity led to increased drag on NASA’s Skylab mission, causing it to deorbit earlier than expected. Improved models over the years have helped scientists better understand the effects of normal solar activity on orbital drag. However, the rarity of extreme events has made it difficult to know exactly how they might affect current satellites – something that is ever more important as more and more satellites fill the skies.

In order to provide advance warning of coming storms, many of NASA’s heliophysics missions help monitor the Sun’s activity. Missions like the Solar Dynamics Observatory and the Solar and Heliophysics Observatory keep a constant eye on the Sun, while other missions like the Ionospheric Connection Explorer, Space Environment Testbeds, and the upcoming Atmospheric Waves Experiment study how space weather and solar variability affect Earth’s upper atmosphere and satellites and other technology. This information helps keeps NASA astronauts and assets in space safe during space weather events.

While no one can predict exactly when the next big solar superstorm or long-lasting storm will hit, Oliveira hopes that the new work will help scientists and engineers be more prepared for its coming. The Sun might be 93 million miles away, but that doesn’t mean it doesn’t have a huge impact on Earth.