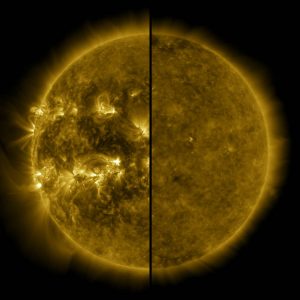 This split image shows the difference between an active Sun during solar maximum (on the left, captured in April 2014) and a quiet Sun during solar minimum (on the right, captured in December 2019). December 2019 marks the beginning of Solar Cycle 25, and the Sun’s activity will once again ramp up until solar maximum, predicted for 2025.
Credits: NASA/SDO

NASA, SEPTEMBER 15,2020: Solar Cycle 25 has begun. During a media event on Tuesday, experts from NASA and the National Oceanic and Atmospheric Administration (NOAA) discussed their analysis and predictions about the new solar cycle – and how the coming upswing in space weather will impact our lives and technology on Earth, as well as astronauts in space.

The Solar Cycle 25 Prediction Panel, an international group of experts co-sponsored by NASA and NOAA, announced that solar minimum occurred in December 2019, marking the start of a new solar cycle. Because our Sun is so variable, it can take months after the fact to declare this event. Scientists use sunspots to track solar cycle progress; the dark blotches on the Sun are associated with solar activity, often as the origins for giant explosions – such as solar flares or coronal mass ejections – which can spew light, energy, and solar material into space.

“As we emerge from solar minimum and approach Cycle 25’s maximum, it is important to remember solar activity never stops; it changes form as the pendulum swings,” said Lika Guhathakurta, solar scientist at the Heliophysics Division at NASA Headquarters in Washington.

NASA and NOAA, along with the Federal Emergency Management Agency and other federal agencies and departments, work together on the National Space Weather Strategy and Action Plan to enhance space weather preparedness and protect the nation from space weather hazards. NOAA provides space weather predictions and satellites to monitor space weather in real time; NASA is the nation’s research arm, helping improve our understanding of near-Earth space, and ultimately, forecasting models.

Space weather predictions are also critical for supporting Artemis program spacecraft and astronauts. Surveying this space environment is the first step to understanding and mitigating astronaut exposure to space radiation. The first two science investigations to be conducted from the Gateway will study space weather and monitor the radiation environment in lunar orbit. Scientists are working on predictive models so they can one-day forecast space weather much like meteorologists forecast weather on Earth.

“There is no bad weather, just bad preparation,” said Jake Bleacher, chief scientist for NASA’s Human Exploration and Operations Mission Directorate at the agency’s Headquarters. “Space weather is what it is – our job is to prepare.”

Understanding the cycles of the Sun is one part of that preparation. To determine the start of a new solar cycle, the prediction panel consulted monthly data on sunspots from the World Data Center for the Sunspot Index and Long-term Solar Observations, located at the Royal Observatory of Belgium in Brussels, which tracks sunspots and pinpoints the solar cycle’s highs and lows.

“We keep a detailed record of the few tiny sunspots that mark the onset and rise of the new cycle,” said Frédéric Clette, the center’s director and one of the prediction panelists. “These are the diminutive heralds of future giant solar fireworks. It is only by tracking the general trend over many months that we can determine the tipping point between two cycles.”

With solar minimum behind us, scientists expect the Sun’s activity to ramp up toward the next predicted maximum in July 2025. Doug Biesecker, panel co-chair and solar physicist at NOAA’s Space Weather Prediction Center (SWPC) in Boulder, Colorado, said Solar Cycle 25 is anticipated to be as strong as the last solar cycle, which was a below-average cycle, but not without risk.

“Just because it’s a below-average solar cycle, doesn’t mean there is no risk of extreme space weather,” Biesecker said. “The Sun’s impact on our daily lives is real and is there. SWPC is staffed 24/7, 365 days a year because the Sun is always capable of giving us something to forecast.”

Elsayed Talaat, director of Office of Projects, Planning, and Analysis for NOAA’s Satellite and Information Service in Silver Spring, Maryland, described the nation’s recent progress on the Space Weather Action Plan as well as on upcoming developments, including NOAA’s Space Weather Follow-On L-1 observatory, which launches in 2024, before Solar Cycle 25’s predicted peak.

For more information on NASA programs and activities, visit:

NASA’s OSIRIS-REx to Asteroid Bennu: “You’ve got a little Vesta on you…”