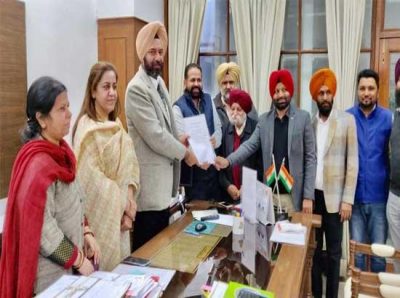 CHANDIGARH, DECEMBER 03, 2019: A delegation of Punjab Public Relations Officers Association today called on the Secretary Information and Public Relations Department Mr. Gurkirat Kirpal Singh to apprise him about its genuine pending demands of the different cadres.

The delegation led by Chairperson of Association Dr. Senu Duggal, Vice Chairman Dr. Opinder Singh Lamba and President Navdeep Singh Gill urged the Secretary to initiate the process for promotions of various cadres including Assistant Public Relations Officers (APROs), Information and Public Relations Officers (IPROs) and Deputy Directors to their next rank expeditiously as they have already completed the requisite experience and eligible for the same.

Giving information in this regard, Association’s Secretary Iqbal Singh Brar said the delegation raised the issue of promotions of APROs as there were 20 posts of IPROs lying vacant in the department of promotion quota and most of the posts of District Public Relations Officers across the state were lying vacant since long. He said that the delegation also requested the Secretary to release the final seniority list of APROs as per the merit of the officers. It was also discussed in the meeting that out of total five vacant posts of Joint Directors, four posts are to be filled through departmental promotions, which would pave a way for promotions of IPROs as Deputy Directors to bring far more efficiency in the functioning of the department.

After giving patient hearing to the demands of Association, the Secretary assured the Delegation that the meeting of Departmental Promotion Committee would be held soon to resolve the issue of promotions of different cadres. The Department would also strongly plead the case of pay anomalies of different categories before the Sixth Pay Commission, assured the Secretary.

Meanwhile, the Secretary also complimented the officers/officials of Public Relations Department for their outstanding contribution in the commemorative functions held to mark the 550th Prakash Purb of Sri Guru Nanak Dev Ji.

Wrestlers happy with their progress at the training camp