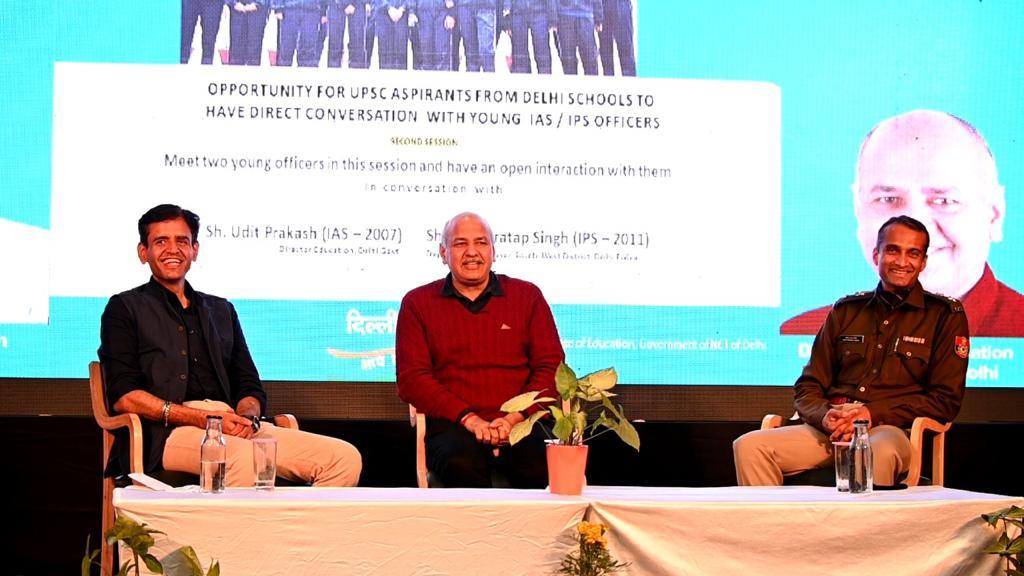 New Delhi: 08.02.2021 :     Delhi school students interacted with IAS officer Udit Prakash, Director Education and IPS officer Ingit Pratap Singh, DCP South West as part of a unique program launched by the Delhi government for children aspiring for UPSC.IPS Ingit Pratap and IAS Udit Prakash interacted with students today as part of the second series of this initiative of the Delhi government. Under this program, UPSC aspirants in Delhi schools get a chance to interact with young IAS/IPS officers every month. The officers share their experiences, strategies and insights about UPSC exam preparation to help students develop a better understanding of the exam. In the second episode of this series today, 75 students from grades 9-12 attended the interaction with two young officers in person while more than 10000 students watched it live on YouTube.IPS Ingit Pratap gave his four-fold mantra for success – focus, discipline, hard work and perseverance. IAS Udit Prakash said that it is our vision to infuse confidence in the students through these interactions and make them aim high. Udit Prakash shared that Ingit Pratap Singh’s mother is a teacher in a Delhi government school. He told the students, “There isn’t any difference between you and us. We were once in your place. With hard work and determination, you’ll be able to achieve your dreams and become an inspiration to many”.Ingit Pratap Singh shared his journey from entering the armed forces and having to leave it thrice due to medical conditions, to finally becoming an IPS officer. About his trysts with challenges, he said, “Each time you fail, you have to keep working. You cannot give up. If one door is closed, knock on the other.”Deputy CM Manish Sisodia also joined the interaction at Sarvodaya Bal Vidyalaya, Rouse Avenue and exhorted students to follow their dream with full passion. He said, “One should not study for just marks, one should study to learn. That way, study never seems like a burden”. He further added that along with knowledge and skills, one should be passionate about their dreams.IPS Ingit Pratap Singh stressed the importance of choosing subjects one is interested in and being as passionate about the preparation as one is about cracking the exam. He spoke about having a bird’s eye view along with an ant’s eye view. “One should not have superficial knowledge; having in-depth knowledge is of utmost importance.” IAS Udit Prakash shared that the Delhi government has planned more such interactions in the future.