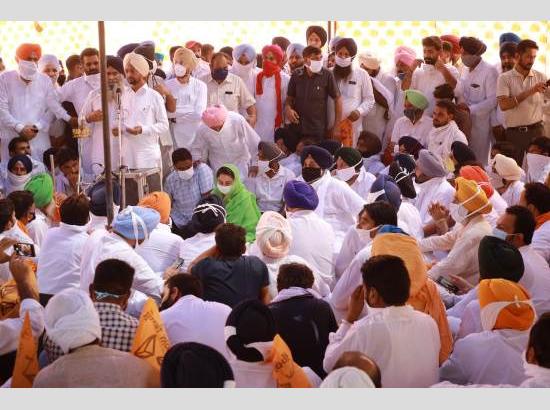 Chandigarh, September 25, 2020: The Shiromani Akali Dal (SAD) today held protests across in  Punjab as part of its ‘chakka jam’ programme to express solidarity with farmers even as it asked chief minister Capt Amarinder Singh to call an immediate cabinet meeting and pass an ordinance to declare the entire State as one Mandi (Principal Market Yard) to ensure the central agricultural Bills are not enforceable in Punjab.

Activists of SAD  held protests in all constituencies of the State along with farmers, khet mazdoor and arhatiyas and assured farmers that the party would not let any discrimination be meted out to them. They party also gave a clarion call to all parties and organizations protesting against the Agricultural Bills to unite for the cause of the farmers.

Speaking at Lambi after leading a Tractor Rally from Badal village, SAD President Sukhbir Singh Badal said chief minister Capt Amarinder Singh should call a cabinet meeting immediately and come out with an ordinance to declare the entire State as a principal market yard. He said subsequent to this the government should also hold a special session of the State Assembly to ratify the Ordinance. “I have moved this proposal two days back. The government should move quickly on this to save the future of our coming generations”, Badal told newsmen later.Badal also announced on the spot that in case the Congress government did not take these measures, the SAD would do so once it came to power in the State.

Speaking on the occasion amidst slogans of ‘eko naara kisan pyara’, former union minister Harsimrat Kaur Badal said she had done her duty as a daughter of Punjab. She said it was chief minister Capt Amarinder Singh who had backstabbed the farmers. “The chief minister knew since August last year that the ordinances were in the offing. There is concrete proof the same in the form of a letter received by his government but he chose to remain silent instead of protesting against the move to protect the interest of farmers. I on the other hand resigned from the ministry when I realized the misgivings of the farmers were not being addressed. If Capt Amarinder Singh is so concerned about farmers he should also resign his post”,  Badal added.

Addressing farmers at a protest site in Amritsar, former minister Bikram Singh Majithia said if the farmer was destroyed, the entire State would be destroyed. He said while the SAD had fulfilled its responsibility towards the farmers, the Congress party was playing a double game. “The Congress is trying to paint itself as pro-farmers when the truth is that the Congress government in Punjab amended the State APMC Act to ensure entry of corporates. He said similarly the Congress party while releasing its election manifesto for the 2019 parliamentary polls had given a call for ending the APMC Act. “Congress leader Rahul Gandhi had even called for amending the Essential Commodities Act”.