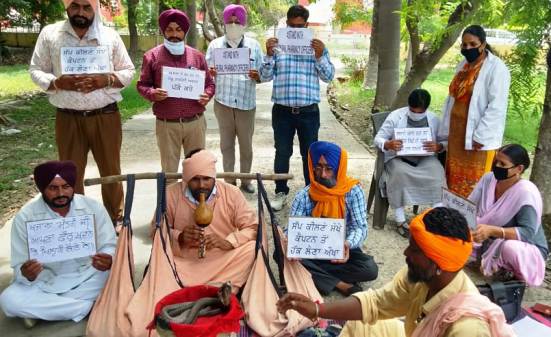 Ferozepur, August 6, 2020:  Having failed on all fronts to draw attention from the government, the Rural Pharmacy Officers have resorted to a unique way of protest by becoming ‘Snake Charmer’ playing on Been, which has entered 47th day today, demanding regularization of services.

Hanu Tiwari, RPOs spokespersons said, Since the outbreak of the Covid-19 pandemic, 1186 RPOs had been performing their duties in the state at the prominent places with the rapid response teams and the government is not ready to redress their grievances.

He said, we have already warned the government of boycotting Covid duties assigned to them if their demands are not met. The RPOs – known as ‘Chota Doctor’ had been in service for the last about 15 years and still working at the meager wages of Rs.10,000 per month and demanding regularization of their services.  We are being exploited economically.

Expressing resentment over the mockery in the name of employment, he said,  it is very unfortunate that the fresh volunteers have been recruited at Rs.1000 per day whereas the RPOs already in service are getting only Rs.10,000 per month.  When the prices of essential commodities besides electricity and power, are very high, survival has become difficult adding that one of our colleagues tried to commit suicide even.

Our only demand is to regularize our services as we are in such an age, not in a position to do any work, he added.

He said, only when people took up a novel way of protest that they were able to force the government to act on their persisting problems.

Giving a warning to the government, he said, in case our genuine demand for regularization is not accepted, we have planned for permanent ‘hunger strike’ by visiting Qadian on August 10.  In case, there is any action from the government, we have also planned for a secret action, he added.