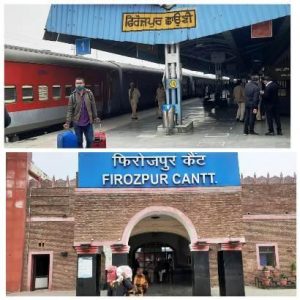 Ferozepur, November 25, 2020: The resumption of train services with the withdrawal of agitation by the farmers has come as a big relief to the people of the State, said Gurpal Singh Chahal, Deputy Commissioner, Ferozepur

Earlier, the train services were suspended as part of measures to prevent the spread of coronavirus but later on, it has to be extended in view of farmers’ protest under rail-roko campaign against the three controversial farm bills.

After 69 days, Dhanbad was flagged off from Ferozepur on Tuesday with only 47 passengers besides 12 goods trains – 3 loaded and 9 empty wagons were moved.

After the Railways resumed train services to Punjab, a wave of happiness could be seen on the farmer’s faces as they will start getting the agriculture in-puts and it will now be easy to bring raw materials for manufacturing units.  Simultaneously, the difficulty in sending the finished goods will also be removed.

DC  said, earlier during the lockdown period and subsequently with the lifting of the same, the farmers’ agitation against the three farm laws started by blocking the rail tracks putting inconvenience to all classes.

He said, the migrant workers used to travel frequently in the trains to work in the State at the time of sowing and harvesting and join back to their family after the season is over.  But on withdrawal of trains in Punjab due to the farmers’ agitation, the movement was badly affected as travelling thousands of kilometers distance in buses was very difficult which will now bring relief to them.

The farmers would now be relieved from the shortage of fertilizer and seeds and the economy of the State will improve.  The operation of trains would also be suitable for employees and their families to comfortably travel in trains to enjoy holidays and family atmosphere with the resumption of the operation of the trains, he added.