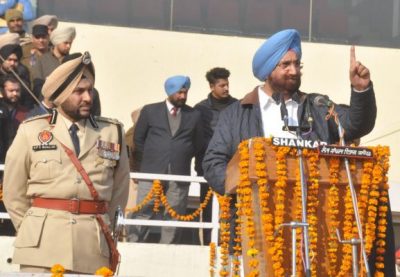 Jalandhar, January 26, 2020: Emphasizing the need for checking brain drain, weaning away youth from menace of drugs and safeguarding the interests of farmers, the Cooperation and Jails Minister Punjab Mr. Sukhjinder Singh Randhawa today gave a clarion call to people to join hands for saving the “Fasal (crop) and Nasal (progeny)” of the state.

Addressing the gathering today after unfurling the national flag in Guru Gobind Singh Stadium during a function to mark the Republic Day celebrations, the Minister called upon all social organizations,  government officials, NGOs and especially the youth to work in unison to restore the pristine glory of the state. He said that it was the bounden duty of all of us to make concerted efforts for fulfilling the aspirations of our great freedom fighters. “It is our bounden duty to make strenuous efforts in this direction as a humble but befitting tribute to the great freedom fighters, who laid down their lives at the altar of the motherland” added  Randhawa. 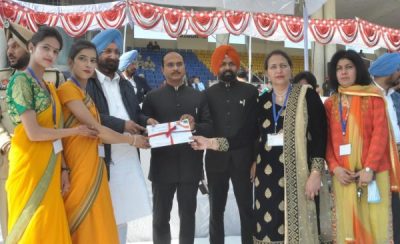 Striking an emotional chord with the people of Jalandhar, the Minister said that it was a matter of pride for him to preside over the Republic Day function at Jalandhar, as it was the part of Doaba region which has produced maximum freedom in the country as iconic hero Shaheed Bhagat Singh and heroes of the Gadar movement and Babar Akali movement hailed from this soil. He also said that Jalandhar was also the land of legendary freedom fighter S. Darbara Singh, who later served as the Chief Minister of the state.  Randhawa also recalled that his father and former Punjab Minister late S. Santokh Singh Randhawa had also unfurled the flag during such function in the 1980s. 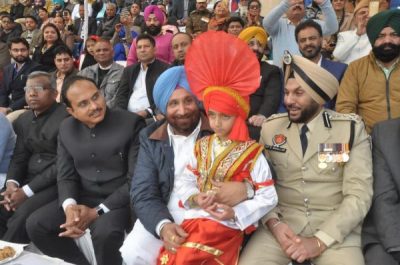 Listing the achievements of the Punjab government led by Chief Minister Captain Amarinder Singh, the Minister said that the state government has been making concerted efforts to ensure the holistic development of the state. He said that the state has been put on a high growth trajectory by the Punjab government by pumping in massive investments and resources.  Randhawa said that till now the state government has provided jobs to more than 11 lakh unemployed youth under Ghar Ghar Rozgar Yojna besides waiving off debt worth Rs 4736 crore of more than five lakh farmers.

The Minister said that Punjab Chief Minister Captain Amarinder Singh had gifted multi-crore development projects to the district during 2019. He said that Chief Minister Captain Amarinder Singh laid the foundation stone of Degree College for Girls at the local Boota Mandi to be named after the chief architect of Indian Constitution Bharat Ratna Dr. Bhim Rao Ambedkar. Similarly, Mr. Randhawa said that on the eve of the country’s 73rd Independence Day, the Chief Minister dedicated the third phase of the Jung-E-Azadi memorial here to the martyrs of the Jallianwala Bagh Massacre and the unsung heroes who were incarcerated in the Andaman Cellular Jail during the freedom struggle adding that to give further impetus to the overall development in and around Jalandhar City, Captain Amarinder Singh also inaugurated and laid the foundation stone of development projects worth Rs 133 crore in the district.

Recalling the stellar role of Punjabis in India’s national freedom struggle, The Minister said that Punjabis have always led from the front against the tyranny, oppression and injustice unleashed by the invaders from time to time. He said that the lives and message of the great Sikh Gurus would ever act as a lighthouse to motivate the people against the tyrannical and oppressive forces.  Mr. Randhawa also paid homage to great national leaders like Lala Lajpat Rai, Shaheed Bhagat Singh, Shaheed Udham Singh, Kartar Singh Sarabha, Diwan Singh Kalapana, Baba Ram Singh, Madan Lal Dhingra, Lala Hardiyal, Sohan Singh Bhakna and several others who sacrificed their lives at the altar of freedom of their motherland.

On the occasion, the Deputy Commissioner Jalandhar Varinder Kumar Sharma and Commissioner of Police  Gurpreet Singh Bhullar felicitated the Minister with a momento.