Home » Raksha Bandhan: A Day Celebrating Tom and Jerry of Our Houses 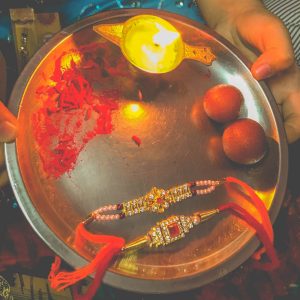 On 3rd August 2020, Raksha Bandhan was celebrated. Though with corona sill haunting everybody, the festival with itself brought loads of happiness. A day dedicated to the relation between a brother and a sister. While a lot of stories are associated with the starting of this tradition, the most notable one being: on the day of Sankranti, Krishna cut his little finger when he was handling sugarcane. Seeing this, Rukmini, the queen sent out to get the help, and Sathyabama, Krishna’s other consort, rushed to get the cloth herself. But Draupadi simply tore off her sari and bandaged his finger. From that day on, Krishna promised to protect her through thick and thins. The word he said was “Akshayam” which means “May it be unending”. That was how her sari became endless and that saved her dignity when she was disrobed in front of all the people by Duryodhana and Dushashana.

Since that day, sisters tie rakhi on their brothers’ wrist. While some believe that rakhi is tied as a symbol of protection which a brother is expected to give his sister, the others believe that the rakhi is tied on brother’s wrist to protect him from all the evils.

With the country stricken with corona, the people went lowkey with their celebration but nonetheless people all over the country celebrated the festival. Supporting the Made in India campaign of Prime Minister Narendra Modi, people this time went for rakhis made in India, which costed very less as compared to the China made ones. With people shopping for the festival, the sellers were also happy as after almost 5 long months they could make some money. For the sweets, most people opted for packed chocolates or toffees rather than buying something from their regular sweet shop. 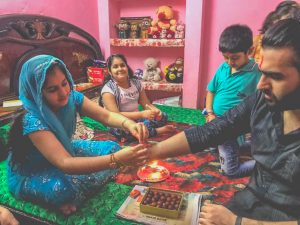 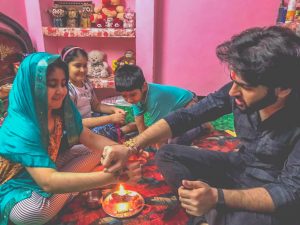 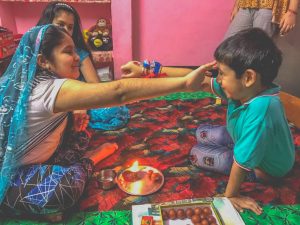 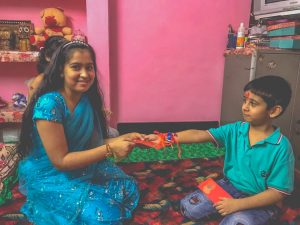 The rakhi morning brought with it the excitement. The sisters got up very early and wore that new dress, wore the best of accessories. They decorated their thalis with diya, tika, rakhi and sweets and waited eagerly to tie it to their brother’s wrist. The brothers planned the gifts way in advance and mostly tried to keep it a secret from their over excited sisters but failed to do so.  The best of the dishes were made and the family sat together to eat. The gifts were opened with utmost excitement and happiness. Lots of photos were clicked too. It was sday dedicated to the weirdest relation of the brothers and the sisters who will give you the kidney if needed but will never give you the TV remote.