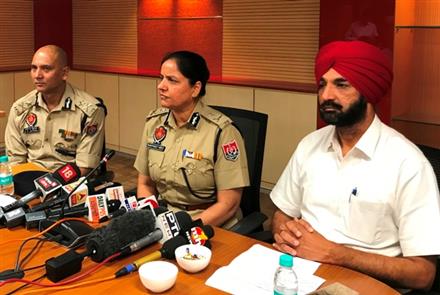 Chandigarh,July 16,2019:: Tightening the noose further on the drugs and smugglers, Punjab Police and Special Task Force (STF) have busted an illegal drug racket of Tramadol tablets and other habit forming drugs operating pan Punjab and has been able to recover consignment of 10,67,800 tablets from the accused chemist.

Addressing a press conference at STF headquarters S.A.S. Nagar, STF Chief Gurpreet Kaur Deo ADGP said the kingpin of this racket Pardeep Goyal of Shaheed Karnail Singh Nagar, Ludhiana has been arrested who was operating from his medical store named Platinum Health Care, Pindi Road, Ludhiana. During the search of his residence 20,500 tablets were recovered by police.

She revealed that accused chemist was arrested by Bathinda Police during investigation of a peddler Sunil Kumar alias Sonu of Maur Mandi and recovered 1,56,000 tablets from his Hyundai car. “Accused Sonu led to his confession for storing more banned tablets in the godown of Delhi-Punjab transport company bases at Maur Mandi where Bathinda police has confiscated 9,11,400 Tramadol tablets. peddler Sonu disclosed that he has obtained the supplies from Pardeep Goyal.

STF chief further revealed that the accused chemist has been dealing with large scale diversion of banned drugs and had obtained a wholesale drug license named as AP Medical Store at Takkar Complex, Pindi Gali, Ludhiana in 2007. Subsequently, in a raid conducted by a drug inspector, his license was suspended for 21 days. After this he changed the name of his firm from AP medical store to Jai Maa on the same license in 2011. But his license was again cancelled in 2018 after recovery of 7 lakh banned illegal tablets from his premises.

However, accused Pardeep Goyal again started new firm viz Platinum Health Care by using the license of his brother-in-law Sandeep Garg of Solan. During investigation it has came to light that he has supplied 70 lakhs tablets throughout Punjab, mainly in Amritsar, Phagwara, Hoshiarpur and Bathinda etc, over the last 10 months.

During the interaction Commissioner Food and Drug Administration Punjab, KS Pannu informed that almost 16000 licensed chemists are selling pharmaceuticals in Punjab out of which 117 chemist shops were found to be selling banned drugs, resulting in cancellation of 421 licenses in last five months. He said 15 offending chemists have already been convicted and 10 were declared proclaimed offenders during the period. He further informed that no new license would be issued to any chemist if once cancelled.

She informed that STF is also coordinating with jail department for keeping a close watch over incarcerated drug traffickers and joint operations are being conducted in border districts in close coordination with the Narcotics control Bureau. In addition to this task force is working in close coordination with the district police and other agencies to maintain strict vigil so as to eradicate the scourge of drugs in Punjab, she added.