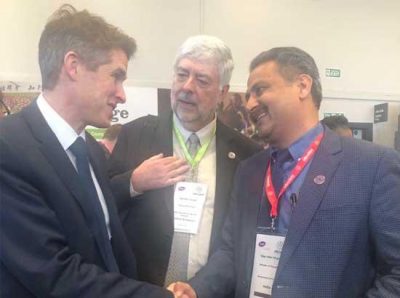 Discussed UNICEF report on girls in length and width

Discussing new report UNICEF, which reads that a third of adolescent girls from the poorest households have never been to school, and spending on education is heavily skewed towards wealthier households,  Singla stressed upon the need for free education to the girls globally on the pattern on the state of Punjab. He apprised Mr. Williamson that developed countries should show their commitment to ensuring every girl could get quality education, which creates and shows the path for the developing countries. He emphatically said it is our duty to ensure that every girl could get an education.

He also said that education and training opportunities must be accessible to all, particularly for low-skilled. “Disadvantaged individual and lack of accessibility create gaps in education and skills, which is leading to economic disparities”, he added.

During the consultations with UK Education Secretary,  Singla also stressed the role of the teachers and said that their role is to make sure every child learns & understands. The Education Minister said that teachers need to be put in the center of any reform so that reforms will go in the desired direction. He disclosed that in today’s world, only a few children can able to distinguish between fact & opinion, so it is important to teach critical thinking skills in school.  Singla said that bold education reforms such as cooperation, collaboration and community engagements, is the need of the hour.

Drawing attention on Youth Cultural and Education Programs, he said that these programs aim at providing an opportunity to youths of different parts of the world, to visit different countries to understand their culture, language, lifestyles, educational avenues and development activities.

Apprising about Britain’s success on the global education stage, Gavin Williamson said, we are extremely determined to keep the status after leaving the EU. He said that children must learn to read in the first decade of life and we must accelerate these efforts.