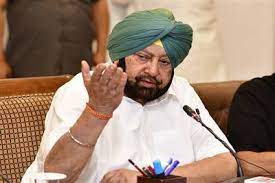 Ludhiana, April 5, 2021: Reiterating his full support for the farmers and the Arhtiyas, Punjab Chief Minister Captain Amarinder Singh on Monday flayed the Bharatiya Janata Party (BJP)-led central government for encroaching upon the rights of the states in its bid to dominate them, while castigating it over its one-sided decision to forcibly impose the Farm Laws and the Direct Benefit Transfer (DBT) on the state’s farming community.

States never faced such problems earlier, he said, slamming the Government of India to trying to destroy the existing relations and systems, that had worked well for more than 100 years, in the name of so-called reforms, which they were trying to impose without taking the stakeholders into confidence.

Punjab’s farmers and arhtiyas have age-old cordial ties, which the Centre was hell bent on damaging, he said, terming the Government of India’s tough posturing and ill-conceived decisions as being against the basic spirit of federalism. He said during his earlier tenure he enjoyed the full confidence and support of former Prime Minister Atal Bihari Vajpayee, and subsequently of Dr. Manmohan Singh, in all major policy decisions/development issues related to Punjab.

Virtually launching the two-day Kisan Mela organized by the Punjab Agricultural University (PAU), Ludhiana, the Chief Minister expressed his total solidarity with the farmers against the black farm laws imposed by Centre, in violation of the 7th Schedule of the Constitution which clearly states that Agriculture is a state subject. The Centre has deliberately impinged upon the state’s power, thus jeopardizing the basic structure of democracy, he said.

Captain Amarinder Singh stressed that the Centre should have taken the farmers into confidence before enactment of these contentious legislations. “Had the Centre been sincere about finding a workable solution to this problem, it would have either consulted the Punjab government or the state’s farmers, as Punjab alone contributes over 40% of foodgrains to the national pool,” he asserted.

The Chief Minister categorically said that Punjab, which was initially not even a part of the deliberations on the agricultural reforms, was included in the high-powered committee only after he wrote to the Centre. Resultantly, the Finance Minister Manpreet Singh Badal and the then Secretary Agriculture KS Pannu attended the two meetings held thereafter but there was no mention of these controversial farm laws at the same, he added.

Pointing out that 144 farmers have died so far during their agitation, he said his government was giving Rs 5 lakhs and a job to a kin of the deceased farmer, while the Centre continued to be insensitive to their pain.

In his address, pointing to the growing problem of scarcity of surface as well as underground water, the Chief Minister urged the farmers to go for drip irrigation in a big way to save the state from becoming a desert in the near future. The fast depleting water table, resulting from the melting glaciers, is a major challenge for the state and the only solution is to get out of the paddy-wheat cycle to save this precious resource, he said. He asked the farmers to make optimum use of drip irrigation technology, besides switching over to less water consuming crops like vegetables, fruits etc.

He further emphasised that efforts should be made to adapt to horticultural crops which have a global market with chances of enormous profitability. The Chief Minister underlined the need to save water for the future generations, pointing out that it was a sacred duty of every Punjab to conserve this precious resource as preached by the first Sikh Guru Sri Guru Nanak Dev Ji. He also shared his learning about drip irrigation, as garnered his during his visit to Israel, where most of the citrus cultivation, besides tree plantation, is done with drip irrigation.

The Chief Minister also urged the farmers to make minimum use of pesticides and insecticides as per the recommendations of PAU experts as their reckless overuse is not only health hazardous but also leads to mass scale rejection of food grains, especially basmati rice, thus financially hitting the farmers.

Acknowledging the immense contribution of PAU stalwarts in agricultural research and introduction of new farm practices, Captain Amarinder Singh said that its former VCs like Dr. Khem Singh Gill, Dr. Kirpal Singh Aulakh, Dr. Gulzar Singh Kalkat would be always be remembered by one and all for ushering in the Green Revolution to make India self-reliant in food production, thus saving it from sheer humiliation of begging for PL-480.

Emphasizing the need to develop a viable technology for making use of paddy straw for power generation, the Chief Minister said a beginning has already been made in the state with production of briquettes for fuel purpose and establishment of small units for generation of power from paddy straw but a lot still remains to be done.

Lauding the role of Guru Arjan Dev Veterinary & Animal Sciences University (GADVASU), Ludhiana, for improving the quality of livestock, the Chief Minister asked the University to intensify its research to develop embryo transfer technology to produce female calves of high quality breed of buffaloes, like Murrah, Sahiwal and Tharparkar cows.

Taking the opportunity to make people aware about the recent second hike of Covid-19, the Chief Minister asked them not to be complacent but to take all necessary precautions like wearing masks, regularly washing hands and maintaining social distancing as per Covid protocols, besides getting vaccinated if they are eligible for the same.  Though the situation in the state, with around 2200 cases and 67 deaths yesterday, was alarming, he would not allow it to become Mumbai with 34,000 cases in a single day, he asserted.