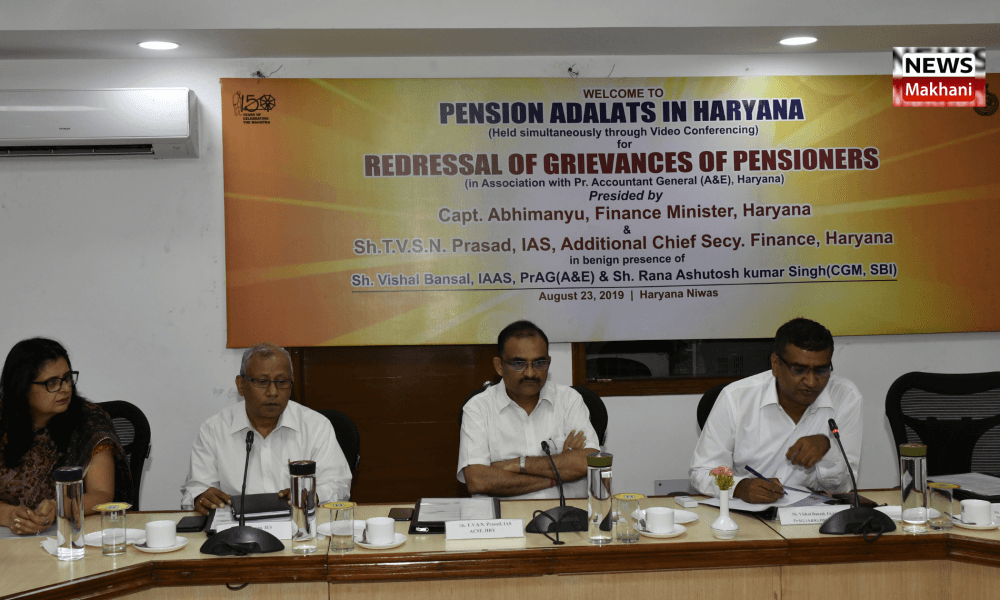 Chandigarh, 19 January 19, 2021: Additional Chief Secretary, Finance Department Haryana,  T.V.S.N Prasad while presiding over the proceedings of ‘Pension Adalat’  directed all the District Treasury Officers to prepare a list of pensioners within a period of 15 days who are either getting pension through treasury offices or through banks. Besides this, the officers should also prepare a list of pending pension-related matters and ensure to send the same to the Finance Department through the concerned Deputy Commissioners so that such cases can be dealt with immediately.

Prasad said this while presiding over the ‘Third ‘Pension Adalat’ regarding provisional pension matters and matters pending in court held here today at Haryana Niwas with the District Treasury Officers through video conferencing. The ‘Pension Adalat’ was organized in collaboration with the office of Principal Accountant General (A&E), Haryana.

The Additional Chief Secretary also called upon all the Deputy Commissioners to take strict cognizance of pending matters related to pension and inform the Finance Department, the concerned department and the Office of the Principal Accountant General from time to time for immediate disposal.

Prasad further directed the Treasury Officers to keep updating the list of pensioners constantly. The main objective of organizing the ‘Pension Adalat’ in Haryana from the year 2018 was to provide relief to pensioners. He said that necessary directions are being issued by the Finance Department to all the departments citing that in view of the Court’s decision to pay pension benefits at a higher rate of interest, it should be paid according to the interest rate of the General Provident Fund for that year. This will solve most cases. He said that under Haryana Civil Service Pension Rules, interest rate is given at the rate of seven percent only.

He also requested all the Drawing and Disbursing Officers to issue Pension Payment Order (PPO) on time. Treasury Officers should also follow it continuously so that the pensioner can avail all types of benefits in a timely manner. He said that it also becomes the responsibility of the concerned officers as any employee who is currently in service has to retire one day or the other.

Financial Advisor and Nodal Officer, Parivar Pehchan Patra (PPP), Sofia Dahia, informed about Chief Minister Manohar Lal’s ambitious PPP scheme and requested all pensioners to visit the camps being organized by the office of Additional Deputy Commissioners in their respective districts to get their PPPs made at these camps.

Principal Accountant General, Vishal Bansal apprised Additional Chief Secretary T.V.S.N. Prasad was made aware that out of 220780 service pensioners in Haryana, data of 151680 pensioners have been linked with banks. He said that e-dash board is also being launched by the department so that information related to pension matters is also made available on it.

Apart from  Manoj Khatri, Deputy Secretary, Finance Department and other officers of the Principal Accountant General’s office were also present on the occasion. Photo:Courtesy: ( Newsmakhni)