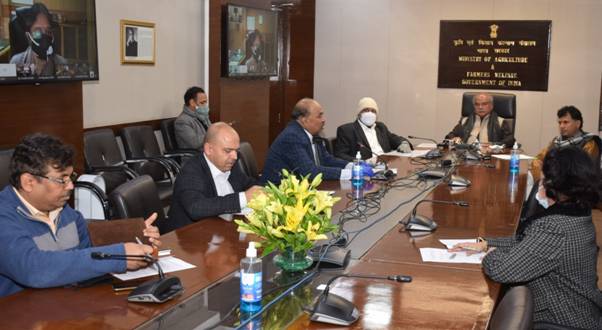 New Delhi Jan 13, 2021: Union Agriculture Minister Shri Narendra Singh Tomar interacted with stake-holders across the country via video conferencing on the occasion of completion of five years of the Pradhan Mantri Fasal Bima Yojana. He said that there is a need to raise awareness about the Pradhan Mantri Fasal Bima Yojana so that many more farmers can take advantage of the scheme.

The scheme, which was launched as a major step to provide a comprehensive risk solution at the lowest uniform premium across the country for farmers, was approved by the union cabinet on 13th January 2016.

The Agriculture Minister also congratulated the state governments, banks and insurance companies for successful implementation of the scheme throughout the country. He cited some notable examples of instances where the scheme was able to safeguard the interests of farmers, such as disbursements of claims during dry spell in Andhra Pradesh, Karnataka, hailstorms in Haryana and locust attack in Rajasthan in 2019.

Shri Tomar said, “The scheme is a milestone crop insurance scheme covering full crop cycle against the losses occurring due to non-preventable natural risk.  A total of Rs. 90, 000 Crore have been paid as claims to farmers till now. In fact, the scheme was fully operational during the COVID-19 lockdown, distributing claims of over 8741.3 crores to 69.70 lakh farmers across India, which is highly commendable.”

The meeting was attended by over 150 representatives including officials of the state governments, banks and insurance companies. All the stakeholders discussed key features of the scheme such integration of land records with the PMFBY portal, Crop Insurance mobile-app, satellite imagery, remote-sensing technology for robust coverage around the country.

As an endeavour to constantly bring about improvements, the scheme was made voluntary for all farmers, post its revamp in February 2020. Over 5.5 crore farmer applications have been received on year on year basis, taking the count of total farmer applications to over 28 crores in the last 5 years.

Agriculture Secretary Shri Sanjay Aggrawal in his address said that the PFMBY is the largest insurance scheme in the world for farmers and it is an example of effective utilisation of technology in the Agriculture sector.

During the interaction with the stake-holdersDr.Bhutani, CEO-PMFBY, made a presentation on 5 years completion of PMFBY. (Click here for the Presentation)

Shri Tomar, along with union minister of state Sh. Parshottam Rupala and Sh. Kailash Chaudhary, congratulated the farmers of India for enrolling in the scheme in such large numbers and wished success for the scheme in the future.