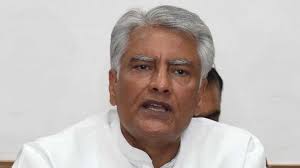 Chandigarh,Feb 17,2019:: Sunil Jakhar President of Punjab Pradesh Congress Committee(PPCC) today said that list of shortlisted names of candidates for 13 Lok Sabha seats of Punjab will be sent to AICC president Rahul Gandhi for final decision. Decision in this regard was taken todah a meeting of Election Committee of PPCC.
Jakhar said that Rahul Gandhi had directed them not to pass resolution authorising him for selection of candidates but send the list of short listed candidates. He said that this was big gesture of AICC president who is very open minded and democratic in thoughts.He said that only winning candidates will be fielded by the party.
Capt Amarinder Singh said that he was not in favour of political alliance with any party in Punjab because Congress stands to win due to three Akali Dals and Aam Aadmi Party are in fray. It will benefit Congress, he added.He also said that party workers shall be given chance to contest the Lok Sabha poll.
Asha Kumari AICC general secretary and incharge of Punjab said that in all 180 applications were received for 13 Lok Sabha seats.She said that Rahul Gandhi wanted to send him names of only shortlisted candidates. She said that same formula has been applied in Himachal Pradesh and Chandigarh. She said that applications of all candidates will be given to committee members and they will be asked to name winning candidate and also give reason for theor selection.
She said that names of candidates will be circulated among members and then sent to screening committee before forwarding short listed names to Rahul Gandhi. She clarified that there was no ban on sitting MLAs from contesting Lok Sabha elections.
The members of election commmittee included Partap Singh Bajwa, Rajinder Kaur Bhattal, Rana Gurmit Singh Sodhi, Gurpreet Singh Kangar, Bharat Bhushan Ashu, Kuldip Vaid, Kikki Dhillon, Nirmal Singh Shatrana, Capt Sandeep Sandhu, Kuljit Nagra, Gurkirat Singh Kotli and heads of various cells of PPCC attended today’s meeting.(credit:punjabnewsexpress.com).