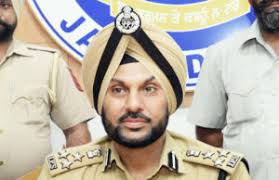 Jalandhar, August 2, 2020: – In its drive against people who were not wearing the mask, the Jalandhar Commissionerate Police has so far issued 25841 challans to them, under the ‘Mission Fateh’ initiated by Chief Minister Captain Amarinder Singh and imposed a fine of Rs 1.22 Crore on the violators since March 23.
Divulging the details, Commissioner of Police Gurpreet Singh Bhullar said that the Police have so far issued 25841 without mask challans and collected a fine worth Rs 1,22,66,100 from the violators.
He said that a fine worth Rs 85, 000 has been imposed so far for 45 violations of home quarantine instructions adding that 448 persons have been fined Rs 113100 for spitting in a public place.
The Commissioner of Police said that a total of 49528 challans have been issued so far to the traffic violators and 2257 vehicles have been impounded.
Bhullar further said that fine worth Rs 137000 has been imposed on overloaded 71 four-wheelers, Rs 17000 on overloaded 34 Autos and fine worth Rs 439000 has been imposed on 217 for violating social distancing norms.
He said that today, 148 traffic challans were issued. He said that today 207 persons without mask were challenged and a fine worth Rs 103500 was imposed on them.
The Commissioner of Police said that this drive would continue in the coming days and action would be taken against the violators adding that the people have to play a vital role for further checking the spread of COVID 19. He said that it was the social responsibility of the residents to ensure the follow directives of the government.