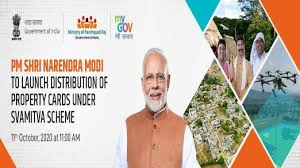 It will pave the way for using the property as a financial asset by villagers.

New Delhi, October,11,2020: In a historic move set to transform rural India and empower millions of Indians, Prime Minister  Narendra Modi will launch the physical distribution of Property Cards under the SVAMITVA Scheme on 11th October, via video conferencing.

The launch will enable around one lakh property holders to download their Property Cards through the SMS link delivered on their mobile phones. This would be followed by the physical distribution of the Property Cards by the respective State governments.­­­­ These beneficiaries are from 763 villages across six States including 346 from Uttar Pradesh, 221 from Haryana, 100 from Maharashtra, 44 from Madhya Pradesh, 50 from Uttarakhand and 2 from Karnataka. Beneficiaries from all these states except Maharashtra will receive the physical copies of the Property Cards within one day – Maharashtra has a system of recovering the nominal cost of Property Card, so it will take a month’s time.

The move will pave the way for using the property as a financial asset by villagers for taking loans and other financial benefits. Also, this is the first time ever that such a large-scale exercise involving the most modern means of technology is being carried out to benefit millions of rural property owners.

Prime Minister will also be interacting with some of the beneficiaries during the event. Union Minister for Panchayati Raj will be present on the occasion. The program will commence at 11 AM.

SVAMITVA is a Central Sector Scheme of the Ministry of Panchayati Raj, which was launched by the Prime Minister on National Panchayati Raj Day, 24th April 2020. The scheme aims to provide the ‘record of rights’ to village household owners in rural areas and issue Property Cards.

The Scheme is being implemented across the country in a phased manner over a period of four years (2020-2024) and would eventually cover around 6.62 lakh villages of the country. About 1 lakh villages in the States of Uttar Pradesh, Haryana, Maharashtra, Madhya Pradesh, Uttarakhand and Karnataka, and few border villages of Punjab & Rajasthan, along with the establishment of Continuous Operating System (CORS) stations’ network across Punjab & Rajasthan, are being covered in the Pilot phase (2020-21).

350 Police officers quarantined for Guard of Honour on Independence Day

Bestiality: New normal in our society