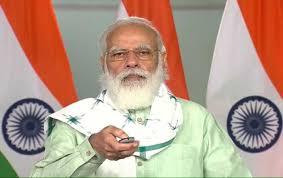 Modi launched the Kisan Suryodaya Yojana for providing 16 hours of power supply to farmers. He also inaugurated the Paediatric Heart Hospital attached with U.N Mehta Institute of Cardiology and Research Centre and a Mobile Application for telecardiology at the Ahmedabad Civil Hospital in Ahmedabad.

The Prime Minister also inaugurated the Ropeway at Girnar on the occasion.

Speaking on the occasion, he said Gujarat has always been an exemplary model for the determination and dedication of the common man. He added after the Sujalam-Suflam and Sauni scheme, the Kisan Suryodaya Yojana Gujarat has set a milestone in meeting the needs of the Gujarat Farmers. He said the work done in Gujarat for years in the field of electricity, has become the basis of this scheme. He said from power generation to transmission all the works were carried out in mission mode to improve the capacity in the state. He said in 2010 when the Solar Power Plant was inaugurated in Patan, nobody could have imagined that India would show the world the path for One Sun, One World, One Grid. Prime Minister appreciated the fact that India has now reached 5th position in the world in the last few years in solar power and is advancing fast.

On Kisan Suryodaya Yojana the Prime Minister said, earlier most of the farmers got power for irrigation in the night only and had to wake up all night. In Girnar and Junagadh the farmers also face the problems of wild animals. Under the Kisan Suryodaya, Yojana farmers will get 3 phase power supply from 5 AM to 9 PM and will bring a new dawn in their lives.

The Prime Minister also lauded the efforts of the Gujarat government for doing this work by preparing a completely new capacity of transmission, without affecting the other existing systems. Under this scheme, about 3500 circuit kilometers of new transmission lines will be laid in the next 2-3 years and will be implemented in more than a thousand villages in the coming days and most of these villages are in tribal-dominated areas. He said it will change the lives of lakhs of farmers, when entire Gujarat gets the power supply through this scheme.

The Prime Minister urged to work continuously in line with the changing times to help the farmers in doubling their income, by reducing their investment and overcoming their difficulties. He listed the initiatives of the Government to double the income of the farmers like the formation of thousands of FPOs, neem coating urea, Soil Health Cards and launching of many new initiatives. He said under KUSUM yojana, FPOs, Panchayats and all such organizations are assisted in setting up small solar plants on barren lands and that irrigation pumps of farmers are also connected to the solar energy. He added the electricity generated from this will be used by the farmers for their irrigation and they can sell the surplus power.

The Prime Minister remarked that along with power Gujarat has done commendable work in the field of irrigation and drinking water also. He said there used to be great hardships for people just to get water and today water has reached those districts which were not imagined before. He felt proud of the projects like the Sardar Sarovar project and Water Grids which helped in water reaching the drought-hit regions of Gujarat. He pointed out that 80 percent of the households in Gujarat have piped drinking water and very Soon Gujarat will be the state where every house will have piped drinking water. He urged the farmers to reiterate the mantra of Per Drop More Crop as Kisan Suryodaya Yojana is being inaugurated. He said providing electricity during the day would help the farmers in setting up micro-irrigation and Kisan Suryodaya Yojana would help in the expansion of micro-irrigation in the state.

Referring to the UN Mehta Institute of Cardiology and Research Center launched today he said it is one of the few hospitals in the country that has a world-class infrastructure as well as a modern health facility and would be India’s largest cardiac hospital. He said Gujarat did commendable work with setting up a network of modern hospitals, medical colleges and connecting every village with better health facilities. He added that 21 lakh people of Gujarat have received free treatment under the Ayushman Bharat scheme. More than 525 Jan Aushadi Kendras offering low-cost medicines have been opened in Gujarat and out of this, about Rs 100 crore have been used to save the common people of Gujarat. 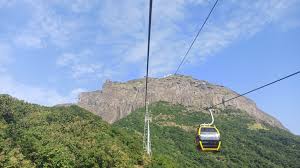 The Prime Minister said Girnar mountain is the abode of Ma Ambe. It has Gorakhnath peak, Guru Dattatreya peak and a Jain temple. He said with the inauguration of the world-class Rope Way more and more devotees and tourists will come here. He said this would be the fourth ropeway in Gujarat along with Banaskantha, Pavagadh and Satpura. He added this ropeway will now provide job opportunities and economic opportunities to the people. He highlighted the hardships people face when such systems that provide so much convenience to the people, remain stuck for so long. He listed the economic benefits accruing to the locals by developing tourist sites. He listed sites like Shivarajpur beach which has got blue flag certification and Statue of Unity which provides a lot of employment opportunities to the locals. He cited an example of Kankaria Lake in Ahmedabad where nobody used to go. And after renovation, yearly about 75 lakh people are visiting the Lake and has also become a source of revenue to many people. He said tourism is one sector which with little investment provides many job opportunities. He urged the people of Gujarat and those spread across the world to become its ambassadors to canvas for the various tourist destinations in Gujarat and help in its progress.

To provide a day-time power supply for irrigation, the Gujarat Government under Chief Minister Shri Vijay Rupani had recently announced the ‘Kisan Suryodaya Yojana’. Under this scheme, farmers will be able to avail of power supply from 5 AM to 9 PM. The state government has allocated a budget of Rs.3500 crore for installing transmission infrastructure under this scheme by 2023. 234 ‘66-Kilowatt’ transmission lines, with a total length of 3490 circuit kilometers (CKM) will be established under the project, in addition to 220 KV substations.

Dahod, Patan, Mahisagar, Panchmahal, Chhota Udepur, Kheda, Tapi, Valsad, Anand and Gir-Somnath have been included under the Scheme for 2020-21. The remaining districts will be covered in a phase-wise manner by 2022-23.

Paediatric Heart Hospital attached with the U.N Mehta Institute of Cardiology and Research

Prime Minister also inaugurated the Paediatric Heart Hospital attached with the U.N Mehta Institute of Cardiology and Research Centre and a Mobile Application for telecardiology at the Ahmedabad Civil Hospital in Ahmedabad.

The U.N Mehta Institute will now become India’s biggest hospital for cardiology in addition to being one of the select few hospitals in the world with a world-class medical infrastructure and medical facilities.

The Institute is undergoing expansion at the cost of Rs. 470 crores. The number of beds will increase from 450 to 1251 after the completion of the expansion project. The Institute will also become the biggest single super-specialty cardiac teaching institute in the country and one of the biggest single super-specialty cardiac hospitals in the world.

The building is equipped with safety precautions like earthquake-proof construction, fire fighting hydrant system and fire mist system. The research center will house India’s first Advanced Cardiac ICU on Wheels with O.T., which is equipped with ventilators, IABP, hemodialysis, ECMO, etc. 14 operation centers and 7 cardiac catheterization labs will also be started at the institute.

Gujarat will once again be highlighted on the global tourism map with the inauguration of the Ropeway at Girnar on 24th October 2020. Initially, there will be 25-30 cabins, with a capacity of 8 people per cabin. A distance of 2.3 km will now be covered in just 7.5 minutes through the ropeway. In addition to this, the ropeway will also provide a scenic view of the lush green beauty surrounding the Girnar mountain.

Honesty is my only agenda, says Urmila Matondkar

FIR against 3 in UP Bar Council chief’s murder