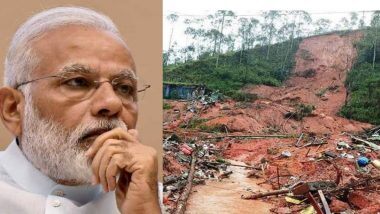 Prime Minister also announced an ex-gratia of Rs. 2 lakh each from PMNRF for the next of kin of those who have lost their lives and Rs. 50,000 each for those injured due to the landslide.

Home Minister Amit Shah too offered condolences to the families of Munnar landslide victims. “Condolences to the bereaved families. Have spoken to DG NDRF, their team has reached the spot to provide all possible assistance to the administration with the rescue work. May injured recover soon,” he said.

The landslide has resulted in 13 casualties so far with continuing search for another 53 missing people. The landslide took place at Rajamala near Munnar, a popular tourist spot in the Idukki district.

As per ANI, the Chief Minister’s Office has contacted the Indian Air Force to provide helicopter services to Rajamala for rescue operations. It is expected to be available soon.( Courtesy: PIB):