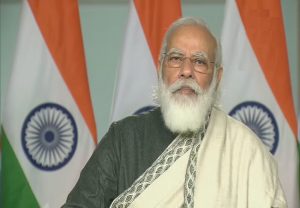 Language of Laws Should be Simple and Accessible to People: PM
Discussion on One Nation One Election is Needed: PM
KYC- Know Your Constitution is a Big Safeguard: PM

The Prime Minister said that it is a day to remember the inspiration of Gandhi Ji and the commitment of Sardar Vallabhbhai Patel. He also remembered victims of the Mumbai terrorist attack which took place on this day in 2008. He paid tribute to the martyrs of the security forces and said that today India is fighting terrorism in a new way and paid his respect to the security forces.

Referring to the Emergency, Shri Modi said that in the 1970s attempt was made against the dignity of separation of power but the answer for that came from the Constitution itself as decorum and separation of power is described in the Constitution itself. After the emergency, the system of Checks and Balances kept getting stronger as Legislature, Executives, and Judiciary moved ahead learning from the episode. This was possible due to the confidence that the 130 crore Indians have in the three branches of the Government and this confidence has been strengthened with time, the Prime Minister added.

The Prime Minister said that the strength of our Constitution helps us in the time of difficulties. The resilience of the Indian electoral system and reaction to the Corona pandemic has proved this. He praised the Members of Parliament for giving more output in recent times and taking a pay cut for helping in the fight against Corona.

Prime Minister cautioned against the tendency of keeping projects pending. He gave an example of Sardar Sarovar which was stuck for years and kept the People of Gujarat, Madhya Pradesh, Maharashtra, and Rajasthan from the massive benefits which finally accrued when the dam was finally constructed.

Shri Modi stressed the importance of duties and said that duties should be treated as the source of rights, dignity, and self-confidence. “Our Constitution has many features but one very special feature is the importance given to duties. Mahatma Gandhi was very keen on this. He saw a close link between rights & duties. He felt that once we perform our duties, rights will automatically be safeguarded”, the Prime Minister said.

The Prime Minister emphasized the need to spread the values of the Constitution. He said as KYC-Know Your Customer is the key aspect of digital security, KYC- Know Your Constitution can be a big safeguard for the Constitutional safety shield. He stressed that the language of our laws should be simple and accessible to the common people so that they feel a direct connection with every law. He also said that the process for weeding out the obsolete laws should be simple and suggested that there should be an automatic system of repealing the old laws as we amend them.

The Prime Minister also called discussion for one nation one election. He talked of simultaneous elections at every level- Lok Sabha, Vidhan Sabhas, or local panchayat level. A common Voter list can be used for this. Digital innovations in the fields of legislatures should be taken up in real earnest for this.

The Prime Minister also suggested holding Student Parliaments guided and conducted by the Presiding officers themselves.