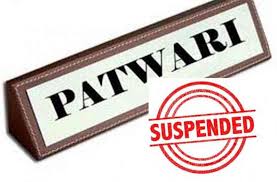 Divulging the details, Gaind said that the action has been taken after the investigation of a complaint filed by officials belonging to 136 battalions of BSF against the erring Kanungo Balkar Singh.  DC said fraud in the revenue record of the postwar circle of Palla Megha was detected while the Kanungo was posted there as Halqa Patwari.

He said that during investigation, serious tempering in the revenue record was made to give benefit to his relative and one other person some other persons during the tenure of Patwari Balkar Singh (now Kanungo) for the land measuring 46 Kanal adding that with this act, the said persons were benefited with the amount worth Rs. 1,11,08,236 as a payment of the land.

DC  said that being the real owner of the land, this payment was supposed to be made in the government exchequer but went into private hands, which was not possible without the in connivance of the Halqa Patwar.

Acting promptly on the inquiry report submitted by the Sadar Kanungo branch, the DC immediately suspended the erring Kanungo under section 7(2) of the Punjab Civil Services Rules besides allowing Tehsil Guru Harsahai as headquarter to the Kannongo Balkar Singh during his suspension period.