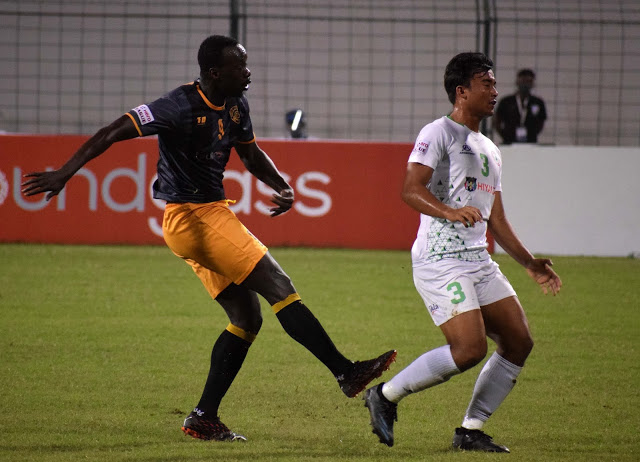 KALYANI, MAR–1,2021: Papa Diawara’s 65th-minute header led RoundGlass
Punjab FC to a narrow 1-0 win over NEROCA at the Kalyani Municipal
The stadium in Kalyani, West Bengal on Monday (March 01, 2021), as the
Curtis Fleming coached side garnered three points to move to the
the second spot in the Hero I-League table. In a match largely dominated
in terms of chances by their opponents NEROCA, Diawara’s ability in
front of goal proved pivotal in RoundGlass Punjab FC’s win.

Out of the top six race and looking to grab vital points in their
the effort to save themselves from relegation, Gift Raikhan’s NEROCA
started the game on an attacking note – out to prove a point. The
The manipur-based club had a golden opportunity to take the lead as early
as the seventh minute when Jiteshwor Singh pounced on a Kiran Limbu
error, only to force the latter into making a good save from a tight
angle.

The attacking flurry in the first half revealed a resurgent NEROCA,
one that was missing the entire season. Subash Singh Singham and
Songpu Singsit caused havoc for the RoundGlass Punjab FC defense.
However, plenty of chances were missed. In the 14th minute, NEROCA
was given another opportunity to take the lead when Judah Garcia was
released onto the goal. With only the goalkeeper to beat, Garcia timed
his shot straight into Kiran Limbu’s legs.

The first chance for RoundGlass Punjab FC came in the 19th minute when
Papa Diawara’s header off Samad Ali’s cross was easily saved by the
opposition goalkeeper. Such was the attacking ferocity of NEROCA in
the opening minutes.

But the best chance of the match fell to Aphaoba Singh for RoundGlass
Punjab in the 31st minute. A long ball from the midfield caught the
NEROCA defense napping and Aphaoba ran straight onto goal. With only
goalkeeper Bishrojit Singh to beat, the midfielder volleyed the shot
straight down the keeper’s throat.

In the 38th minute, Akbar Khan’s shot from inside the box rattled the
RoundGlass Punjab’s post as NEROCA came inches close to taking the
lead. However, two back-to-back saves by Bishrojit Singh in the dying
embers of the first half kept the Punjab attack force out as the
the half-time scoreline read 0-0.

Bishrojit Singh’s brilliance to deny Papa Diawara and Hormipam from
close range in the dying embers of the first half changed the tempo
of the match as RoundGlass Punjab FC came to play the second half
spurred.

In the 53rd minute, Papa Diawara rattled the post with his acrobatic
shot from inside the box. But Papa had to wait to open the
goal-scoring tally. In the 65th minute, Joseba Beitia’s free-kick from
the left flank found Papa Diawara inside the box and the Sengalaese
headed the ball into the back of the net to hand RoundGlass Punjab FC
the lead.

For all the chances that they created in the first half, NEROCA was
left reeling after conceding the goal. However, the team did not give
up and pressed for the equalizer. RoundGlass Punjab FC’s defensive
pairing, however, held their opponents at bay, while chances that came
for NEROCA’s strike-force were missed.

NEROCA tried to stage a comeback in the dying embers of the second
half but missed the finishing ability upfront. At the full-time
whistle, the scoreline read 1-0 as RoundGlass Punjab went second on
the Hero I-league table, four points adrift of league leaders
Churchill Brothers