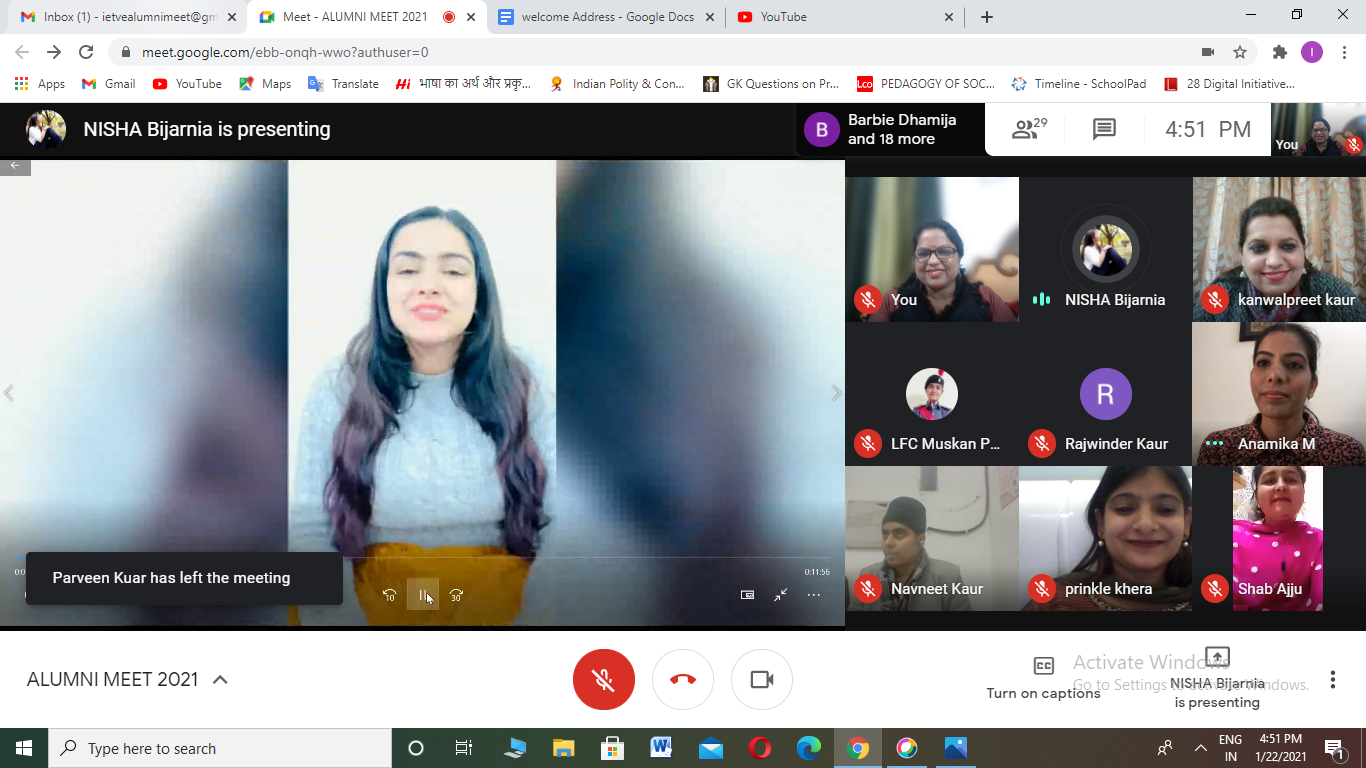 Chandigarh January 23, 2021: Department of Sociology organized a series of lectures to celebrate the alumni week from 21st to 23rd January under the support and guidance of Vice-Chancellor Professor Raj Kumar ji and the PUAA. It started on 21st with felicitation of Professor Paramjit Judge, President, Indian Sociological Society by Chairperson Professor Rani Mehta. He interacted with the audience by highlighting the greatness of the sociology department and how it has been the epitome of knowledge on urban studies, demography, sociology of religion, peasant and agrarian studies etc. He also very elaborately described the relevance of sociology in present times with emphasis on an interdisciplinary approach. It was followed by an analytical and thought-provoking lecture by Dr.Saurabh Anand, HOD, Social Sciences, Gujarat National Law University, Ahmedabad on teaching sociology in Law: Issues and Challenges. He stated that law can be seen as a tool of social change and highlighted through illustrations that it should work on a problem-based approach for improvement in society.

On 22nd January, Prof Jodhka from the School of Social Sciences,JNU, in his talk on ‘ Revisiting the rural in the 21st century India ‘focused on the historical conceptualization of the rural and mentioned that we need to get rid of binary biases created by the enlightenment period which brought about inequalities between rural and urban. He also favored the introduction of “Sociology of Settlements ” in order to study the diversified villages. This was followed by the felicitation of Dr. Sagarpreet Hooda,IG police, by the chairperson Prof Rani Mehta. He is an eminent alumnus who has a history of working in government administration as well. He highlighted the significance of his sociology background in solving cases of sexual assault and domestic violence against women and discussed the better understanding of crisis situations with vast knowledge of sociology.

On 23rd, Nishtha Kaushik, founder of Zios Makerspace which is tricity’s first and only hardware incubation based product design and prototyping firm for start-ups , discussed about the significance of innovative organizations in building new devices for the betterment of the society and highlighted the role of such organizations in tackling emergency situations such as covid 19 by producing face shields and ppe kits . After this ,  Jaspreet ,creative film maker ,assistant director in panjabi cinema, beautifully explained the historical growth of cinema in India and how social issues have been always a high point in cinema which has led to a comprehensive understanding of societal problems .

The 6 sessions on all three days were well attended by over 200 participants in all and very pertinent questions were asked after each session.