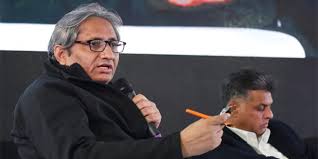 ‘India belongs to all & Dissent is not disloyalty’, avers Ravish Kumar

Sets stage on fire during second day of MLF

Chandigarh, December 14, 2019: India, as a nation belongs to all its citizens and dissent, is not disloyalty to the government, said eminent journalist Ravish Kumar here on Saturday.

Taking part in the panel discussion on the theme Ek Aur Satyagraha Bharat Ki Aatma Ke Liye, Ravish underlined the fact that religion was being made sole criteria to define nationality and allegiance to the country.

Ravish Kumar also said that media should be an impartial institution but that is not the case nowadays as the media is not voicing concern over the stifling of the right to dissent which is the cornerstone of democracy. He also said that asking questions today has become a crime.

Criticizing the Citizenship Amendment Bill (CAB), he said that religion should not be the basis for defining nationalism.

Taking part in the discussion, Teaching faculty from Delhi University Geeta Bhatt said that India is an age old civilization with many cultures thriving here. Supporting the CAB, she added that this bill aims to facilitate the marginalized sections who have been facing religious persecution in other countries. 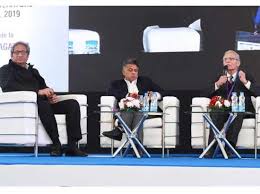 Articulating his views on the occasion, MP from Sri Anandpur Sahib Manish Tewari said that secularism assumes great significance in today’s era. He further said that the two nation theory was actually first propounded in 1909 by Bhai Parmanand, Allama Iqbal in 1930, Savarkar in 1937 and Muhammad Ali Jinnah in 1940. He said that at the time of partition in 1947, the then Union Government opted for secularist structure to keep divisive forces at bay. But these very forces are raising their ugly head again.

Coming hard on the CAB, Manish Tewari said that in accordance with the international laws, giving shelter to the refugees is the duty of every country without religious bias as there is difference between refugees and the illegal immigrants.

Panjab Univ, Senate unanimously elects Dr. Mukesh Arora,Prof. Rajat Sandhir as its Board of Finance for a term of one year
Global warming is a natural process not man-made, Says Dr Ritesh Aryan
Comment