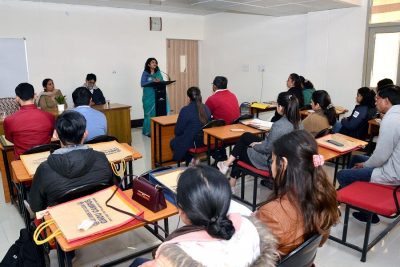 Amritsar, February 06, 2020 ( By SK.Vyas): A One-Week “Short Term Course on Gender Sensitization” was inaugurated here today at the UGC-Human Resource Development Centre of the Guru Nanak Dev University. As many as 24 University and College teachers are participating in it.

Prof. Shweta Shenoy, Head, MYAS-GNDU Department of Sports Sciences and Medicine presided over the inaugural session. Attributing the necessity of conducting such courses for the faculty to the current social environment, she said that the students of today need to be made aware of all these issues related to this term in addition and need to be educated. She traced the history of the feminine movements in the world and said that gender sensitization means to respect the dignity of the opposite gender and never to undermine it.

In the world of today, she said that when both the genders are rubbing shoulders with each other in all the domains of life, it is becoming more and more imperative to comprehend the exact meaning of it. The right time to sensitize the child towards it is, in fact, in the formative years, she stressed. The heinous crime, perpetrated against the fairer gender as reported in the media today cannot be stemmed only with the implementation of the strong law of the land, but the right education in terms of ethical, moral, social, cultural values also have to play a vital role in eradicating such crimes, she concluded.

Prof. Kuldip Kaur, Head, Punjab School of Economics and the Course Coordinator apprised the participants with the thrust area of the course. Explaining the term ‘Gender Sensitization’, she opined that it encompasses various aspects like legal, economic, social, political, ethical, religious, etc., which are going to be discussed threadbare during the deliberations of this course.

Dr. Mohan Kumar, Deputy Director of the centre advised the participants to make a virtue out of the necessity & to put in their best to augment their knowledge, expertise not only in the academic sessions but also through mutual interactions with each other. Earlier, the Chief Guest was accorded a welcome by presenting a sapling by Prof. Kuldip Kaur & Dr. Mohan Kumar.