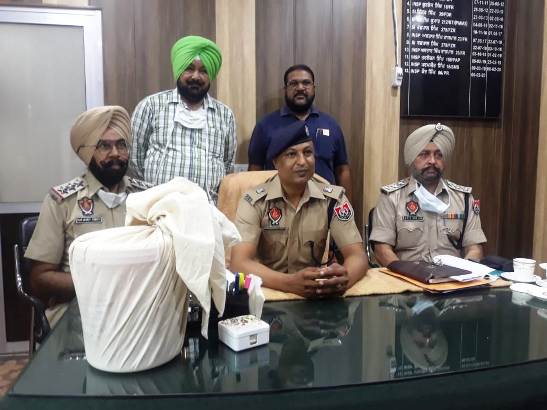 Ferozepur, October 16, 2020:  Following the arrest of a smuggler Kirshan Singh by the police with the recovery of 9 kg heroin, the Ferozepur claimed to have recovered another consignment of 2.150 kg heroin from the designated place concealed in the fields revealed during the interrogation.

Added here, this is a recovery on Day-3 of heroin from the Punjab border by the police, CIA staff, and BSF.  The vigilant sleuths have thwarted the attempt of smuggling of contraband into Indian Territory. Prior to this, 9 kg, 2 kg of heroin was recovered. Even during the last week, at three different places, the alert Ferozepur police working swiftly on its tip-offs also put its hands-on recovery of 3.870 kg heroin with the arrest of two drug peddlers.  All these consignments were pushed into the Indian Territory by Pakistan-based drug smugglers.

Divulging with the details, Mukhtiar Rai, SP(Investigation) heading the special operation team of Balwant Singh Inspector In-charge CIA and Rajinder Pal ASI, in Ferozepur, under his tutelage of SSP Bhupinder Singh said, during the investigation of  Krishan Singh smuggler having links with his counterparts in Pakistan and from whom 9 kg heroin was recovered from near Indo-Pak border from Lakha Singh Wala Post, revealed about the hiding of another consignment of 2.150 kg heroin hide in the paddy fields near of Gurdial  Singh of Rajo Ke, under PS Khalra area Gate N.143/M, District Tarn Taran having a value of Rs.1.75 crore in the international market.

He further said, the total recovery made is of the value of Rs.55.75 crore from the alleged accused Krishan Singh. Further investigations are on and still, more clues are expected to come to the surface with the recovery of heroin.

WRITES to direct Societies to provide Machined to farmers

Final opportunity for landowners to get compensation:DC