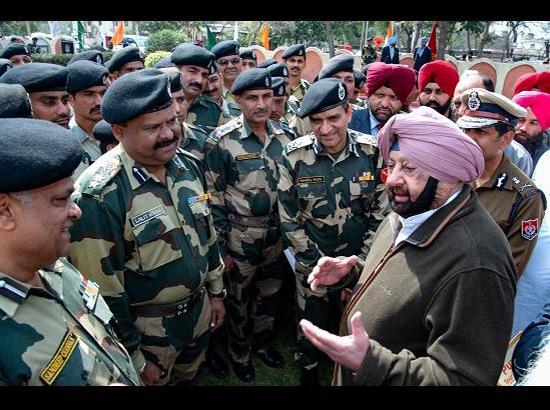 Chandigarh, May 03, 2019: Punjab Chief Minister Captain Amarinder Singh on Friday completely demolished the Bharatiya Janata Party’s vicious propaganda against the Congress on the issue of the Balakot air strikes, defending his party’s right to demand proof from the Narendra Modi government as ‘nothing wrong’.

“If the strikes were as successful as the Modi government claimed them to be, it was actually a matter of immense pride for our country and for all of us. So let us see how our forces destroyed Pak buildings and shattered their inflated ego,” the Chief Minister told a TV interviewer, when asked to comment on BJP’s allegation that the Congress was being anti-nationalist by asking proof of the operation.

This is not the first time proof had been asked, he said, even in the 1965 war he remembered an Army major bringing chopped ears of those killed on the other side of the border to put all doubts of a certain Indian operation at rest. Photographs were released of the Kargil operation too, he pointed out, adding that demanding proof from the government was not unpatriotic by any standard.

“I’m very proud that our aging MIG 21 plane brought down a Pak F-16 and would be delighted to know about the success of our Air Force in Balkot,” said Captain Amarinder, who has been unsparing in his criticism of the prime minister over the latter’s shameful attempts to take credit for the actions of the Indian Air Force (IAF) and seek votes in the names of martyred soldiers.

The Chief Minister ridiculed Modi for not finding anything unpatriotic in this but finding the Congress demand for proof on Balakot as anti-national. “Have they (BJP) forgotten who won India its wars against Pakistan in 1965 and 1971,” he asked.

“I’m a military historian also and if Modi doesn’t want to give the proofs of the strikes to the press or the Congress, he can send them to me”, he quipped, adding that as an ex-army man and an Indian, he would feel extremely proud if the success of the IAF was as being claimed by the BJP leaders in their speeches.

In any case, said the Chief Minister, it was the BJP that started the numbers game by going overboard to usurp the accomplishment of the air force by claiming hundreds of casualties in Balakot. The Congress only countered with its demand for proof, he said, adding that the BJP should not hesitate to grab the opportunity to show the world, and all doubt mongers, of the great success of the Indian forces.

Captain Amarinder also blasted through BJP’s allegations of ‘tukda tukda gang’ against the Congress, saying it was the BJP and its leaders who were making ‘tukdas’ (pieces) of the nation with their divisive politics and nefarious agenda to create bad blood among the people on account of caste, religion etc.

Not just India but the world can see through BJP’s politics of hate and their blatant lies, said the Chief Minister, adding that the people of the country were waiting to throw out the anti-national Modi government.