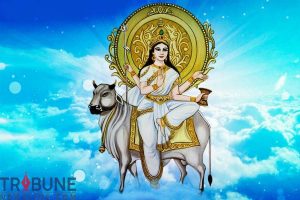 On Ashtami Navratri or Navratri Day- 8, we wordship Maa Durga’s Mahagauri Avatar. Maha means extremely and Gauri means white. Mahagauri has four arms, carries a trident and a damaru in two of them. she rides on a white bull.  According to Hinduism, Goddess Mahagauri has the power to fulfill all the desires of her devotees. The one who worships the goddess gets relief from all the sufferings in life.

The story of Mahagauri’s origins is as follows:  The demons Shumbha and Nishumbha could only be killed by a female child of Parvati. Hence, as advised by Brahma, Shiva used his magic to turn Parvati’s skin black, giving Parvati the epithet “Kali”, meaning “black”. However, the word “Kali” can also mean “death”, so Parvati was teased. Parvati was agitated by this teasing, so she performed severe penance to Brahma so as to get her fair complexion back.

She succeeded in her penance and was advised by Brahma to take a bath in the Mansarovar River in Himalaya. As she took a bath, her dark skin separated from her and took the form of a female. She was called Kaushiki, being born from the skin of Parvati. As a result of the separation of her black skin, Parvati got her white fair complexion back, and so she gained the epithet “Mahagauri”.

Still, for the task of demons’ assassination, she gave her fair complexion to Kaushiki and she (Parvati) again attained the form of Kali. Kali transformed into Chandi (Chandraghanta). Chandi killed demon Dhumralochan. Chanda and Munda were killed by Goddess Chamunda who appeared out from the third eye of Chandi. Chandi then transformed into Kaalratri again to kill Raktabija and Kaushiki had killed Shumbh and Nishumbh, after which she got merged with Kali to transform her back into Gauri.

Hence, Goddess Kaushiki too got merged with Parvati, hence giving her the titles of Mahasaraswati or Ambika in Skanda Purana and Devi Mahatmya (part of the Markandeya Purana) respectively.

Another story tells that Parvati a dark complexion, but in a different version runs as follows: Goddess Parvati made up her mind to perform an austere penance as advised by Sage Narada so that she might beget Lord Shiva as her husband. So, she renounced all the comforts of the palace and started performing penance in the forest. Her severe penance continued for many years. She braved the heat and cold, rains and drought and terrible storms. Her body was covered with dust, earth, soil, and leaves of trees.

She had developed a blackish skin over her body. At last, Lord Shiva appeared before her and gave his solemn word that he would marry her. He bathed her vigorously by the holy waters of the Ganga emanating from his matted hair. The holy and sacred waters of Ganga washed off all the dirt clinging to Parvati’s person and she became white-complexioned and glorious. Thus, by virtue of having acquired a white complexion, Parvati came to be known as Mahagauri (Extremely Fair).

One day in the Kailash mountains, Mahadev used his magic to turn his wife Parvati’s fair complexion into a black complexion, as a joke. Because of this, he began to playfully tease her by calling her names such as Kali (black) and Shyama (dark). However, Parvati did not find her husband’s joke to be very amusing or humorous in any way, and she was hurt and insulted by his remarks.

She leaves him to go to an isolated place in the forests and performed severe penances to appease Lord Brahma so that he can rid her of her black complexion and be given back to her, her fair complexion once again. Her severe penance continued for numerous years. She braved the heat and cold, rains and drought and terrible storms.

She later came back out as a beautiful golden woman, wearing white garments and apparels. She was none other than Goddess Mahagauri. Mounted upon the back of a bull, she rode back home to Kailash, where Mahadev was waiting for her. The two became reunited once again and lived happily with their sons, Kartikeya and Ganesh.

Meaning: Goddess Mahagauri, you are present everywhere. I pray to you again and again.

The colour for the seventh day is Peacock Green which represents the desires and wishes that get fulfilled.