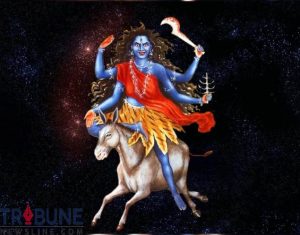 Day 7 of Navratri is known as Saptami and on this day we wordship Kaalratri Avatar of Goddess Durga. Kaal means time as well as death whereas ratri refers to night or darkness/ignorance. Hence, Maa Kaalratri is the one which brings the death of darkness or the one who ends ignorance. She is also commonly referred as Kali.

Maa Kaalratri is the most terrorizing forms of Durga. Her complexion is dark as night and has untied bountiful hair. She has four hands and carries a scimitar and a thunder bolt in two of her hands. The other two hands are held in the form of ‘giving’ and ‘protecting’. She has three yes and flames come out of her nostrils when she breathes. Her necklace shines like the moon shines in the night. Her mount is a donkey.

Once there were two demons named Shumbha and Nishumbha, who invaded Devaloka and defeated the demigods. Indra the ruler of the gods, along with the other gods went to the Himalayas to get Lord Shiva’s help in retrieving their abode. Together, they prayed to Goddess Parvati.

Parvati heard their prayer while she was bathing, so she created another Goddess, Chandi (Ambika) to assist the gods by vanquishing the demons. Chanda and Munda were two demon generals sent by Shumbha and Nishumbha. When they came to battle her, Goddess Chandi created a dark Goddess, Kali (in some accounts, called Kaalratri). Kali/Kaalratri killed them, thereby acquiring the name Chamunda.

Thereupon, a demon named Raktabija arrived. Raktabija had the boon that if any drop of blood of his fell onto the ground, a clone of him would be created. When Kaalratri attacked on him, his spilt blood gave rise to several clones of him. As such, it became impossible to defeat him. So, while battling, Kaalratri furious at this, drank his blood to prevent it from falling down, eventually killing Raktabija and helping goddess Chandi to kill his commanders, Shumbha and Nishumbha.

Another legend says that Goddess Chamunda (Kali) was creator of Devi Kaalratri. Riding a powerful donkey, Kalraatri chased the demons Chanda and Munda and brought them to Kali after catching and incarcerating them. Then these demons were killed by Goddess Chamunda. This story is closely related with another Goddess named Chandamari.

Yet another legend recounts that, there was a demon named Durgasur who want to destroy world and drove away all the devas from Swarg and snatched four Vedas. Parvati got to know about this and created Kaalratri, instructing her to warn Durgasur against an attack. Durgasur’s guards however tried to capture Kaalratri when she turned up as a messenger. Kaalratri then assumed a gigantic form and delivered the warning to him.

Subsequently, when Durgasur came to invade Kailash, Parvati battled him and killed him gaining the name Durga. Here, Kaalratri serves as an agent who gives the message and warning from Parvati to Durgasur.

Meaning: Goddess Katyayani, you are present everywhere. I pray to you again and again.

The colour for the seventh day is Green which refers to the various aspects of Mother Nature and its nourishing qualities.