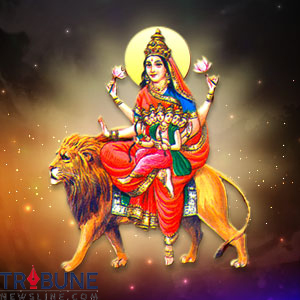 Maa Skandamata is worshipped on Navratri day 5 or the Panchami Navratri. Her name means Mother of Skanda, another name of Lord Shiva and Ma Parvati’s son Kartikeya. In this form, Ma Durga has four arms. She holds Kartikeya in one hand, holds a lotus in the second and the third hand and blesses her devotees with the fourth hand. She rides a lion and sits on a lotus.

The birth of Kartikeya is an interesting story. After Sati immolated herself, Shiva became detached from the worldly affairs and started practicing austere penance as an ascetic. At the same time, the gods were under an attack from demons who were being led by Surapadman and Tarakasura.

They had a boon that only Shiva or his offspring could kill them. fearing that Shiva may never have an offspring, the gods rush to Lord Vishnu for help but Vishnu tells that the gods themselves are responsible for the situation. Had they not attended Daksha Prajapati’s yagna without Lord Shiva, Sati would have never immolated herself. He then tells them about Parvati, who is an incarnation of Adi Shakti and destined to be Shiva’s consort.

On behalf of gods, Rishi Narada approaches Parvati and tells her that if she observes extreme penance, she would get Lord Shiva as her consort, who was also her husband in the previous birth. After thousands of years of observing penance, Shiva relents and marries Parvati.

Shiva and Parvati’s energy combines and produces a fiery seed. Lord Agni is entrusted with carrying the seed safely to Saravana Lake till the radiance from the seed becomes Shiva’s offspring. The heat from the seed becomes unbearable even for Agni to hold and he hands over the seed to Ganga who safely carries it to the lake in forest Saravana. Goddess Parvati then took the form of the water body as she alone was capable of carrying the seed of her consort, Shiva. Later, six- faced Kartikeya takes birth and is taken care of by six Krittikas (mothers) he thus gets the name Katikeya. He grew up to be a handsome intelligent and powerful youth and thus got his name Kumara (Youth in Sanskrit).

As the commander- in- chief of the army of gods, he is blessed by all the gods and given special weapons for the war against Tarakasura and Surapadman. He, later, kills Tarakasura in a fiercely fought battle.

Thus, Ma Skandamata is worshipped as the mother of a supremely gifted child. When a devotee worships Skandamata, lord Kartikeya is automatically worshipped as he is sitting in his mother’s lap. Her worship leads to peace prosperity and salvation.

Meaning: Godess Skandamata, you are present everywhere. I pray to you again andagain.

1.Yellow Rose must be offered to Goddess Skandamata. It is believed that offering yellow rose helps strengthening relationship with children.

2.On this day, offer Banana to Goddess Skandamata.

The colour for the fifth day is Royal Blue which represents divine energy.