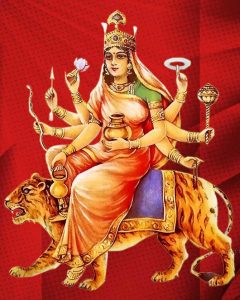 On Navratri Day- 4 or the Chaturthi Navratri we worship Maa Kushmanda. The name of this Smiling Goddess is made up of three words: “Ku” which means little, “Ushma” which means the warmth of energy and “Anda” which means an egg. When we combine these three words, one can derive the meaning of her name which means the one who is the creator of this “little cosmic egg” called Universe.

Ma Kushmanda possesses eight arms. She wields a Kamandala, a bow, an arrow, a lotus, a pot of nectar, a disc, a mace, a rosary in her eight arms. She rides a lion which evokes fearlessness in her devotees.

It is said that when the universe was non- existent and there was darkness everywhere, Ma Kushmanda produced this “little cosmic egg” with her smile. The universe was then filled with light. It is believed that she is the source of all the energy in the universe.

Further, it is also believed that she lives in the core of the Sun and thus provides energy to all the beings. She is believed to provide direction to Surya, the Sun God.

After creating the Universe, Ma Kushmanda created the first beings. There were three supreme goddesses. With her left eye, she created a terrorizing form and named her Mahakali. From her center eye, she created another ferocious form and named her Mahalakshmi. From her right eye, came an extremely benevolent and smiling form, which she named Mahasaraswati.

From the body of Mahakali, a male and female took birth. The had five heads and ten arms. He was named Shiva. The female had one head and four arms. Her name was kept Saraswati.

From Mahalakshmi’s body also a male and female took birth. The male had four heads and four arms. Ma Kushmanda named him as Brahma whereas the female was named as Lakshmi. She had one head and four arms.

She then offered Shakti to Shiva, Saraswati to Brahma and Lakshmi to Vishnu as consorts.

Thereafter, Ma Kushmanda absorbed the three supreme goddesses and herself entered Shakti as an orb of divine and unending energy.

It is thus believed that Ma Kushmanda is a form of Shakti who created this Universe and was the first being in the entire Universe. The gods that she created then went on to create other living being in the Universe.

Meaning: Godess Kushmanda, you are present everywhere. I pray to you again and again.

The color for the fourth day is red symbolizes passion, auspiciousness as well as anger.