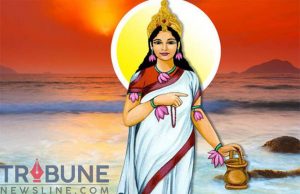 Day two of the Navratri is also called Dwitiya. On this day we pray to the Brahmacharini Avatar of Goddess Durga. Depicted as walking bare feet and holding a japamala and kamandal in her hands, she symbolizes bliss and calm. The name Brahmacharini is derived from the combination of two words- “Brahma” which means tapa or penance and “Charini” which means an ardent female follower.

Read on to find out how Goddess Durga’s determination got her this name:

When Parvati grew up, sage Narada paid her a visit. He told her that she did have a chance to marry her husband from her previous birth, Lord Shiva, if she followed the path of penance. Determined to marry Shiva in this birth as well, Parvati embarked upon an extremely difficult regime of penance and devotion.

For a thousand years, she ate only fruits and flowers. Thereafter for a hundred years she ate only vegetables, followed by three thousand years of eating only fallen leaves. She slept on the floor of the forest under an open sky for years in order to successfully complete her tapa.

Finally, she gave up eating fallen leaves as well, and continued her penance without food and water for many years. Due to thousands of years of penance, her body became extremely weak and fragile.

The news of such long and hard penance reached everywhere. In the end, Lord Brahma appeared in front of Parvati and told her that no one had observed tapa the way she had. He also told her that only she could have undertaken such hardships as her love for Shiva was true and pure. He also blessed her that she would have Lord Shiva as her husband in this birth.

Following her penance, Parvati came to be known as Maa Brahmacharini. Later, Lord Shiva accepted Parvati as his wife.

Meaning: Salutations again and again to the Devi (Goddess), who is present the   name of maya. Brahmchaarini wears white clothes; she holds rudraksh mala, lotus flower, kamandalu, in her hands. Goddess Brahmcharini is the “tapaswini” roop of goddesses, who gives freedom from kaama, krodha and bhog.

Colour of the Day

The colour for the second day is Orange as it symbolises tranquillity, brightness and knowledge.