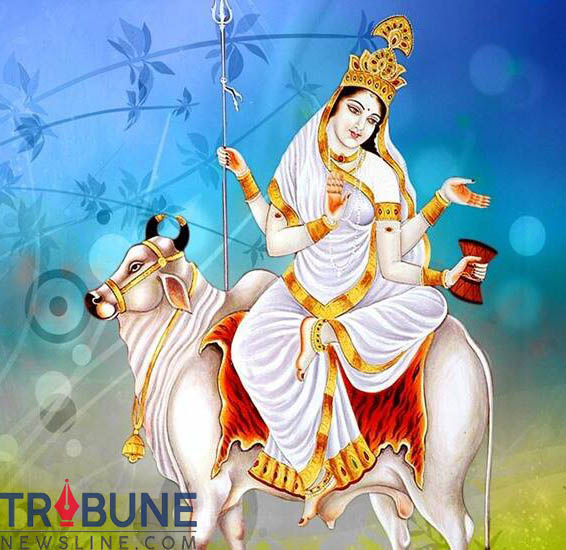 Pratipada or the first day of Navratri when Kalash Sthapana is done. On this day, Maa Durga is worshipped in the form of Shailputri. Goddess Shailputri is the first manifestation of Goddess Durga. She holds a Trishul in one hand and a lotus in the other and rides a bull called Nandi. Shailaputri is the Adi para shakti, who was born in the house of King of Mountains “Parvat Raj Himalaya”. The name “Shailaputri” literally means the daughter (putri) of the mountain (shaila). Variously known as Sati Bhavani, Parvati or Hemavati, the daughter of Himavat – the king of the Himalayas.

In some scriptures like Shiva Purana and Devi-Bhagavata Purana the story of Mother Goddess is written as follows: Maa Bhagwati in her earlier birth was born as a daughter of Daksha Prajapati. Then her name was Sati and she was married to Lord Shiva. But in a sacrificial ceremony organized by her father Prajapati Daksha, her body was burned in the yogic fire, because she could not bear the insult of her husband Lord Shiva by her father Prajapati Daksha in the sacrificial ceremony. In her next birth she became Goddess Parvati, the daughter of Parvat Raj Himalaya. Like her previous birth, in this life also Maa Shailaputri (Parvati) married Lord Shiva.

Story behind the name

Getting her name as Mata Shailputri has a story behind it. This was the time when Devi Parvati was still in her teens. Once She was playing with her friends in the grasslands near the Himalayan mountains, which was her home. Grasslands were for grazing cattle and near to flowed a big river, namely Varuna River with a lotus flower on its edge. While she was seeking her friends, she came across the shore of the river full of lotus flowers. It was so mesmerizing for her that she wanted a flower from the river. She was about to pick one from it when suddenly a cow came mooing to her from the grasslands as if she was in great pain and wanted help from Devi Parvati.

The cow took Devi Parvati to the nearby grasslands. What Devi Parvati saw was horrible at first sight. She saw the skeletons of many cows as if the flesh was freshly eaten by someone. The picture in front of Devi Parvati was almost impossible to understand so she kept her hand on the cow head and closed her eyes. Then she got to know about the demoness Tarika (Sister of terrific demon Tarkasur).

After getting to know about the all-over situation Devi Parvati decided to fight against the demoness Tarika. For the fight, she took an unusual track. She took a form Shail (a small mountain-like stone of nearby 10-15 feet). The cow hid behind the structure and started mooing. The cow’s mooing attracted the evil demoness Tarika towards her. Tarika arrived there and saw the Shail and the cow behind it. Tarika tried to fetch the cow but it wasn’t possible as the Shail would move from one side to another. Tarika was trying hard to fetch the cow but was unable to.

Tarika, fed up by the conflict with the Shaila, decided to break the Shaila. On the other hand, Himavan raised the sword to kill Tarika and Tarika raised the sword on the Shaila. Suddenly the Shaila burst and everyone stayed still. As the Shail started bursting, slowly golden rays emerged out of the Shail and Devi Paravati came out in her true form with a golden crown on her head and Trishul in the hand. The cow was still in her position behind Devi Paravati. Again, she was about to attack Devi Parvati. Devi Parvati lifted the Trishul and threw it on Tarika. Tarika was hence defeated and killed. the cow ran towards the shore of the river, picked one lotus, brought it and gave it to Devi Parvati.

After this incident, Devi Shailputri gave a boon to the cow who stood behind her during the conflict and intended to protect Nature. Devi Shailputri’s boon was, like Devi Adishkati, from that day onwards the cow will also be a universal mother of all the creatures, without Gaupujan none of the auspicious works will get its fulfillment and killing a cow will be next to Brahmahatya (the eternal and ultimate massacre).

From the Yogic point of view, the First Navratri is considered to be a very auspicious day. This is the Yogic start for being in tune with the Divine Mother Durga. Those who want to have any kind of initiation in the Shakti Mantras can have it on the First of Shukla Pratipada. Goddess Shailputri governs the planet Moon in astrology. Worshiping her can eliminate all the bad effects of the Moon.

Meaning: “I pay my Vandana/obeisance to the Divine Mother Shala- Putri, who bestows upon the choicest boons to the devotees. The moon in the crescent form is adorned as the crown on Her forehead. She is mounted on the bullock. She holds a lance in her hand. She is Yashasvini – the Celebrated Mother Durga.”

The color for the first day is Grey as it refers to the quality of the destruction of evil.

Over 50% Indians concerned next pandemic could come from farm animals
Sow by burying crop residues in ground itself, appeals DC
Comment