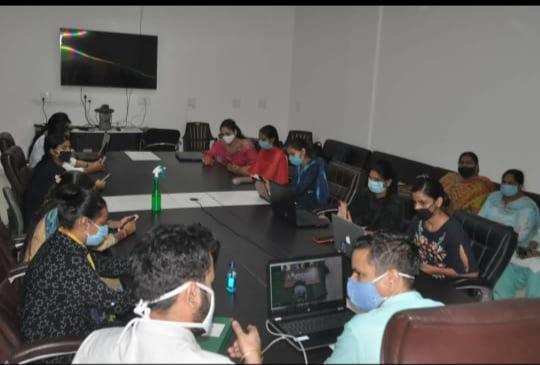 Says, district administration making all-out efforts to empower women with a variety of opportunities in the district

Jalandhar, January 24,2021: With 150 girls took coaching for civil services exams (IAP/PCS) in the first phase, the district administration is going to hold banking exams coaching camp for about 200 girls in the next phase.

Congratulating on the eve of National Girl Child Day on Sunday, Deputy Commissioner Ghanshyam Thori said that the district administration was making all-out efforts to empower women in the district, especially by enhancing their skills. He said that earlier in September a 90-days long camp for the preparation of civil services exams was organized, whereas many as 150 girl aspirants took training to crack this precious exam. He stated that the camp comprising three batches conducted for three months simultaneously. Now, the administration going to hold a special camp for about 200 girls to make them prepare for the banking exams adding the deputy commissioner said that the tenders for this upcoming camp were already floated. He mentioned that the camp was expected to launch next month, where training facilities to be provided to the girls.

Thori further added that the administration has been taking up such initiatives for a long time, and due to that the driving training camps, coaching camps for competitive exams, skill development camps for girls have become a routine affair in the district. He said that the young IAS officers, who have recently cleared the UPSC exams, have visited these camps and imparted crucial information about the preparations. The Deputy Commissioner himself personally interacted with the young aspirants and encouraged them to achieve their goal to become a civil servant.

Divulging more, District Program Officer Gurminder Singh Randhawa said that in the first phase the contract for this coaching camp was given to the Ludhiana-based LaunchPad IAS Academy, now bids for the banking exam’s coaching camp was set to open on February 1, 2021. He said that after finalizing the bids, the work would be allotted immediately.